Managing Director/Chief Executive Officer, Asset Management Corporation of Nigeria (AMCON), Mr Ahmed Kuru at the weekend reiterated the fact that if at sunset AMCON is unable to recover its outstanding huge debt of over N5trillion, the debt burden would automatically become the debt of the Federal Government of Nigeria for which taxpayers’ monies will be used to settle in the long run.

Kuru who spoke at the Borno Hall of the Trancorp Hotel, Abuja at the first seminar for AMCON Receivers/Receiver Managers in General Enforcement said the implication of such failure would be that the Nigerian public will be made to pay for the recklessness of only a few individuals who have continued to take advantage of the loopholes in our laws to escape their moral and legal obligations to repay their debts.

The AMCON Chief Executive who was represented at the event by Mr Aliyu Kalgo, AMCON’s Group Head, Resolution Strategy at the 2-day event called on all AMCON partners especially in the receivership business not to allow a few individuals to escape with the commonwealth of all Nigerians. He however cautioned that whatever step AMCON Receivers intend to take in the process must however be in strict compliance and within the confines of the law. 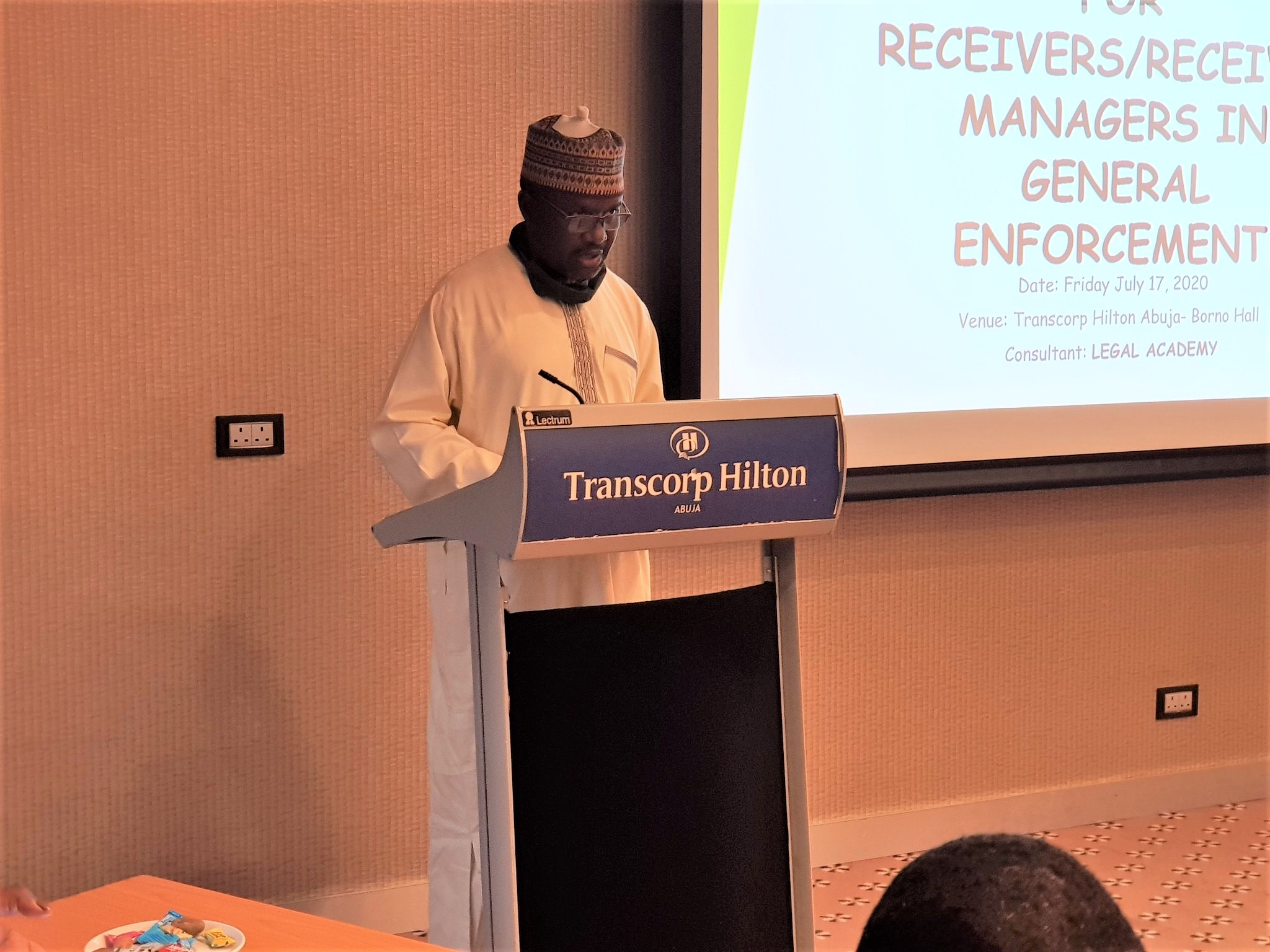 Kuru who underscored the key role of AMCON Receivers in the debt recovery drive of the government agency said further, “…We reiterate, our Receivers are very key to the success of AMCON. In order to streamline the functions of our Receivers and make them more effective and accountable, we have developed a new Receivership Framework, which will henceforth govern our relationship in terms of management of the assets and accountability.

“We have had course to disengage some of our Receiver Managers due to non-performance. We did that because assets are being abandoned without cause or plan to come out of the debt. And at times Receiver Managers are confused about their responsibilities. Therefore, I urge the participants to partake actively in this interactive session and share some of their experiences with one another so that we can all succeed in our collective efforts to recover the over N5trillion from these recalcitrant debtor, which is a national assignment,” the AMCON Boss said.

Speaking in the same vein, Dr Francis Chuka Agbu SAN, the Senior Partner, Lexavier Partners and Mr Alheri B. Nyako, the Chief Executive Officer of Alheri Legal and Allied Services Consulting and a former Board Secretary/Director Legal at the Nigeria Deposit Insurance Corporation (NDIC) took their turn to amplify the position of the AMCON CEO as well as the many possibilities AMCON can leverage to hasten recovery given the enormous powers of receivership as well as winding up and bankruptcy proceedings in its Act, which they described as undisputable and potent tools for debt recovery.

Dr. Agbu SAN, who was also represented by Mr Mohammad Sani Umar described receivership as the most effective debt recovery tool within the current insolvency/debt recovery regime and challenged AMCON to leverage it to the maximum to help Nigeria especially now that the federal government needs a lot of money to bridge Nigeria’s financial challenged that have been heightened by the outbreak of the dreaded Coronavirus (COVID-19) pandemic.

He said, “Receivership, as a debt recovery strategy, is arguably the most effective debt recovery tool within our current insolvency/debt recovery regime. This is primarily because of the control, which it gives to the debenture holder/creditor over the assets, or the assets and business of the debtor company. By virtue of section 393(4) of CAMA, upon appointment of a Receiver and Manager, the powers/control of the directors over the debtor company become immediately suspended. Even where the Receiver is not empowered to act as Manager, he retains executive control over such portion of the company’s assets, which have been charged.”

Narrowing down to how AMCON can apply the powers of receivership, the senior advocate of Nigeria added, “With respect to AMCON Receivership, the AMCON Act has further extended the powers/rights of AMCON-appointed Receivers beyond the scope of CAMA and the general principles on receivership. Firstly, pursuant to Section 48(3) of the AMCON Act, the Receiver’s powers to assume control over the assets of the company is not limited to the assets, which have been charged under the Eligible Bank Asset (EBA), but also included unpledged/uncharged assets.

“This extraordinary provision bestows a far-reaching advantage on AMCON in the realisation of outstanding EBAs by enabling AMCON to sustain maximum pressure on the debtor company (including its officers and shareholders) and increasing the pool of assets from which AMCON may realise the indebted sum.”

On his part, the Chief Executive Officer of Alheri Legal and Allied Services Consulting who insisted that AMCON must activate winding up and bankruptcy proceeding in its debt recovery drive argued that Section 52 of the AMCON Act has already provided for winding up of a debtor’s company upon a demand notice for a liquidated sum owed and failure to pay in full within 30 days, thus, making the inability to pay a debt a ground for winding up under the AMCON Act, which is similar to Section 408 (d) of CAMA.”