It did not have quite the significance nor the glory of the FA Cup final, a mere 28 days ago. But the storyline remains the same: Pierre-Emerick Aubameyang is centre stage and Mikel Arteta keeps winning at Wembley.

Pre-match favourites were once again undone by Arteta’s game plan and Aubameyang, apparently always on the brink of signing a new Arsenal contract but never quite there, delivers the goals which are accumulating an unlikely haul of silverware.

Arsenal, a club that has endured huge turmoil in the past year, not least over the summer where staff have been sacked and executives removed, exude a defiant optimism. Despite the pay cuts imposed on players and the financial issues caused by lockdown and the lack of Champions League football, they continue to make unexpected progress. The winning strike from Aubameyang was in the penalty shoot-out, which came after the 1-1 draw. It was decisive and struck with the authority of a man in the prime of his career, hard and high into the top corner, beyond Alisson. It was the fifth of Arsenal’s penalties, Reiss Nelson, Ainsley Maitland-Niles, Cedric Soares and David Luiz having preceded him in a perfect shoot-out. 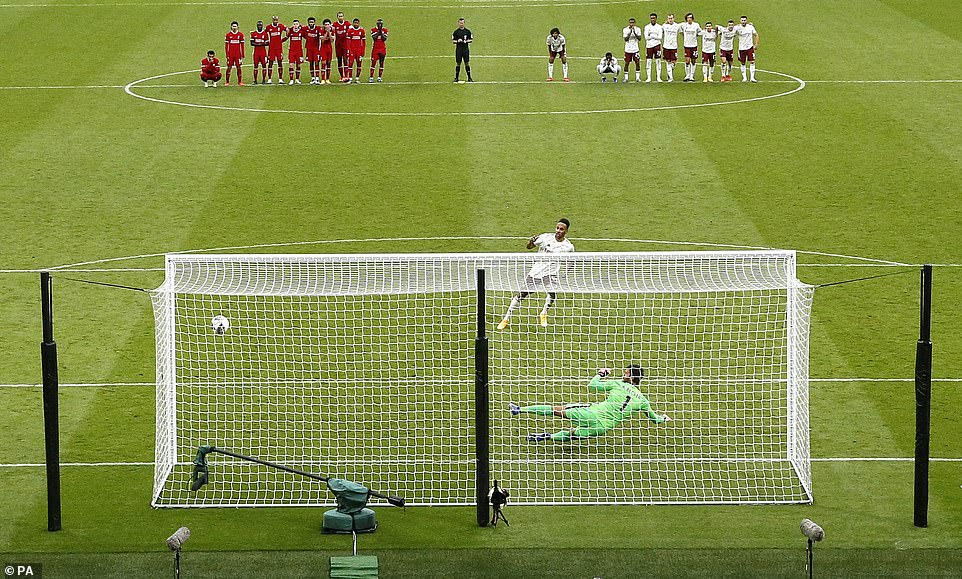 For Liverpool, Mohamed Salah and Fabinho were both on target before Rhian Brewster stepped up. He was only brought on in the 90th minute, presumably specifically to take a penalty. However, his strike, pretty much his first touch, though firmly struck was high and crashed off the bar. As such, successful strikes from Takumi Minamino and Curtis Jones couldn’t prise the initiative back.

So yet again it was Arsenal taking home a trophy against the odds. Once more they eschewed possession and gambled that their pace on the break would secure them a trophy. It is, you suspect, a game plan some way short of Arteta’s ultimate ambitions to dominate games. But needs must at present. And given the quality of the opponents he has defeated lately there will be no rush to change. He has undone the best-laid plans of Manchester City, Chelsea and Liverpool at this stadium, emerged triumphant in tactical jousts with Pep Guardiola, Frank Lampard and Jurgen Klopp. For a 38-year old rookie, that’s some record. Now comes the trickier part. How to sustain that over a season?

‘That’s a different task,’ admitted Arteta. ‘I don’t think it’s a one-off when you beat the teams that we beat in the last two months consistently. But obviously after ten months the table showed last season that we were a long way away and the gap is enormous. And we have to try to close the gap as quickly as possible and there are a lot of aspects we have to improve.’

For now though the counter attack slickness suits them just fine. The passing leading up to their opening goal was delightful, not least the a glorious crossfield Bukayo Saka pass to Aubameyang.

On scoring, the Arsenal striker performed a homage to deceased actor Chadwick Boseman, crossing his arms in the Wakanda Forever salute, just as Boseman’s Black Panther did in his most-celebrated film. Yet there was also a tribute to Thierry Henry in that moment. It was the way in which Aubameyang exuded authority the second he received the ball from Saka. Neco Williamas, 19, who had played well going forward and was deputising for Trent Alexander-Arnold, was mere prey and Aubemeyang hunted him down mercilessly, just as Henry once did with defenders. He took the ball, paused and the cut inside, with a burst of pace, his power easing his way to goal.

Then came the shot, curling yet powerful, beyond the reach of Alisson: pure Thierry. After that was Wakanda celebration and a broad grin of delight, though you never got a smile from Henry. So much for Arsenal still hinges on their latest No.14 signing his new contract.

For Liverpool, this was a minor disappointment and there was a clear sense that it will take a few weeks to be fully up to speed. Jurgen Klopp will however take solace in the fact that last season’s Community Shield against Manchester City followed precisely this pattern. And last season didn’t end up so badly. Here Mohamed Salah, Roberto Firmino and Sadio Mané did not quite induce the terror that the names of the team-sheet suggested. The endeavour was honest and there was a sense of peak fitness coming. And they missed Alexander Arnold, not just defensively but as a key creative outlet as well.

With Arsenal, there is a slick fluidity and a renewed energy. You see it in the born-again David Luiz, the revived Granit Xhaka but more than anyone, you see it in Bukayo Saka and Maitland-Niles. Saka was involved in everything good down the right but also when switching to the left, he too sensed a weakness in Williams, got in front of him on 45 minutes and delivered a superb low cross with which Nketiah couldn’t quite connect.

Maitland-Niles is a revelation as a wing back under Arteta, an energetic blur patrolling the left flank. He celebrated his 23rd birthday with a man-of-the match performance and an England call up. Wolves want to sign him but Arsenal surely can’t let an academy gem leave? Arteta seemingly will apply tough love. ‘He has to convince me every day on training that he can compete at this level not every three months but every three days,’ he said. ‘At the moment he is showing me he can do it and he is changing a lot of things around him to become the player he can be. The best way to show a player what the manager thinks about him is to play him.’

When Arsenal did falter, they had the might of Emiliano Martinez to rely on, another linked with moves away but surely on the brink of being seemingly established as Arteta’s No.1? When Sadio Mané was in on goal on 56 minutes, the Argentine made his 6’3” frame look even bigger, a giant blocking the way through to goal. Generally though the Arsenal back three – which was often a back five thanks to the energy of Hector Bellerin and Maitland-Niles – were too assiduous to allow such chances.

Liverpool though just weren’t quite the finely-tuned machine we have come to expect. What was familiar was the forward runs and reaching crosses of Andy Robertson and the power in the air of Virgil van Dijk. On six minutes it looked as though that combination had established a lead, when Robertson placed his free kick on the Dutchman’s head and Van Dijk headed home. He was, however, just offside. And just before that Aubameyang opener, Williams had delivered a cross of similar quality onto the head on Milner, who, with a free header, should have done better than directing the ball wide. It took a change from Jurgen Klopp to get his side back in the game. On came Takumi Minamino, with Salah moving central and Firmino dropping behind him in what was almost a 4-2-4. There is never backward step taken with Klopp.

Eventually it paid off on 73 minutes, the sheer number of bodies in the box eventually bamboozling Arsenal. Minamino’s neat touch found Salah, who chested it back to his teammate, with Arsenal vainly appealing for handball, If anything Salah’s chest pass came off the arm of Cedric Soares and fell into the path of Minamino. He adjusted his body shape and prodded home from close range to take the game to that penalty shoot-out.