It is now official! Arsenal earlier today have confirmed the free signing of former Chelsea winger Willian Borges da Silva popularly known as Willian. The Brazilian according to the report by SportsMail is set to earn an astonishing £220,000-a-week at the Emirates Stadium.

The report has it that the 32-year-old’s arrival was confirmed on the Gunners’ official Twitter account on Friday morning as he signs a three-year contract and is handed the number 12 shirt.

On arrival at Arsenal, Willian has set his sights on winning the Premier League title and European trophies with Arsenal after manager Mikel Arteta convinced him to sign.  It came as SportsMail revealed the incredible amount Willian will earn at his new club in the wake of 55 members of staff being made redundant this month.

Though Willian’s basic salary is lower than he earned at Chelsea, when bonuses, a signing-on fee and loyalty payments over the three years are included, it will amount to £220,000-a-week or around £35m over the course of his contract. Willian revealed that a conversation with Arteta persuading him to join them and wants to help the club improve on their disappointing eighth-place finish in the Premier League this season. 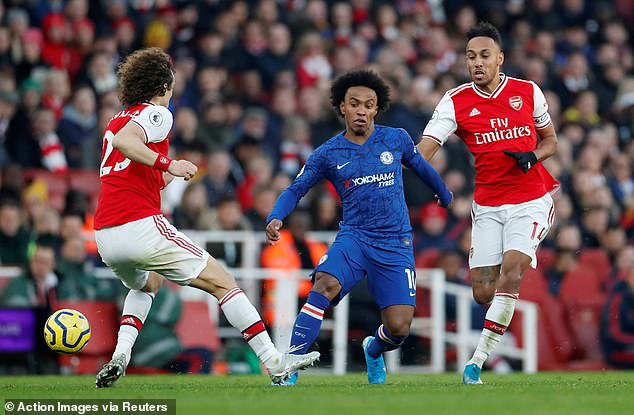 Arsenal only made it into the Europa League by beating Chelsea to win the FA Cup earlier this month. He said: ‘[I like] the way they play, everything is amazing – the stadium, and I think that with Arteta, Arsenal have a great opportunity to fight again for titles in the Premier League and in Europe so I’m very happy because of that.

‘I’m excited to start. I can’t wait to go on the pitch and do my thing to help my team-mates and to help this club to shine again. That’s what I want. When I talked to [Mikel], the conversation was good, he gave me confidence to come to Arsenal. He said a lot of good things to me and that’s why I have come to Arsenal.’

Arteta said: ‘I believe he’s a player that can really make a difference for us. We have been monitoring him for the past few months, we had a clear intention to strengthen in the attacking midfielder and the winger positions [and] he is a player that gives us a lot of versatility, he can play in three or four different positions.

‘He has the experience of everything in the football world but to still have the ambition to come here and contribute to bring the club where it belongs. ‘I have been really impressed with all the talks I have had with him and how much he wanted to come.’

Gunners Technical director Edu said: ‘I know him very well, since a long time ago because we’ve been working together for the Brazilian national team and of course I was following him because he played for another club. ‘He has a lot of fantastic attributes as a person, as a football player of course, his character.

‘I’m 100 per cent sure that everybody in the dressing room, the fans, myself and Mikel will enjoy having Willian in our side.’ The vast sums involved raise questions after Arsenal’s announcement last week that they are proposing to make 55 members of staff redundant.

Insiders say Willian’s unveiling was put back because of the ‘poor optics’ if it had followed hot on the heels of the job-cuts statement. Arsenal deny that is the case. Nevertheless, to commit to spending what could end up being around £35million on a veteran player shortly after the redundancy proposal is bound to go down badly. The deal is also features an option for a fourth year.

Willian — who won the Premier League twice in a glittering Chelsea spell — can shortly start training with his Arsenal team-mates ahead of the new campaign, which starts on September 12. ‘He would have got nowhere near that money at Chelsea,’ a source explained. The signing-on fee reflects that it is a free transfer and if he sees out the duration it’s a great deal for him.’