Luis Suarez has completed his emotional farewell from Barcelona by signing a two-year deal at Atletico Madrid. The Uruguayan striker ended his Barcelona career as the club’s third highest goal scorer of all time, netting 198 goals in 283 appearances for the Catalans. The striker looked like he was heading to Juventus and even took an Italian language test in Perugia in order to get residency ahead of a proposed move to the Serie A champions. But the former Barcelona man has completed a £5.5million to Diego Simeone’s side after being told by new Catalans boss Ronald Koeman he was no longer required at the Camp Nou.

A statement from Atletico read: ‘We welcome to our team one of the world’s most prolific strikers, who gives his all on the pitch and has proved his quality on the most demanding of stages.’ Despite missing out on the LaLiga title, Suarez ended the season well with Barcelona scoring 16 goals in 28 matches despite missing most of the season with a serious knee injury.

However, Koeman told the Uruguayan in a reported one-minute phone call that his time at the Camp Nou would be coming to end, leaving the striker upset with both him and club president Josep Maria Bartomeu. It appeared that Juventus would be the 33-year-old’s next club and he travelled to Italy to try and seal the move. The negotiations were marred by Suarez being accused of cheating in the language test required to seal his residency. 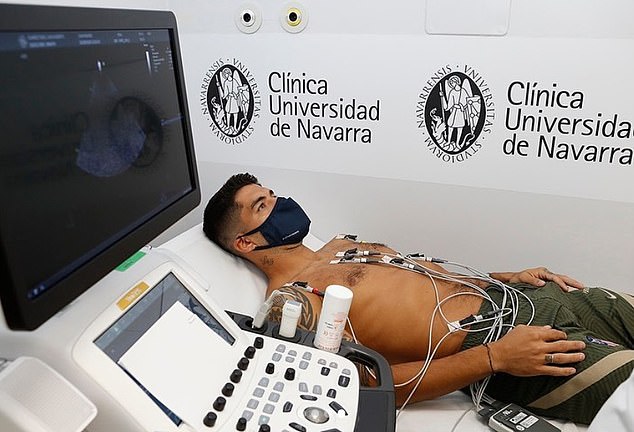 The striker then changed his mind about a move to the Serie A champions and will now line-up against his former side Barcelona later this season. Suarez said goodbye to the Catalan side in a press conference on Thursday which was attended by Barcelona stars including Lionel Messi and Gerard Pique.

The forward admitted he will always be grateful to the club that stood by him after he was banned from football for biting Giorgio Chiellini at the 2014 World Cup. In an emotional farewell, the 33-year-old said: ‘They knew I had come from making that mistake (the World Cup bite) and they still wanted to support me and bring me in.

‘It was a dream for me to play at the best club in the world. I have made many friends too so that also makes me very happy. ‘It’s a player leaving but it is also a human being with feelings who goes. I want to remember all the nice moments, the titles, the goals and the chance to play with the best player in history.’

Barcelona captain Lionel Messi, who himself was close to leaving Barcelona this summer after handing in a shock transfer request, slammed the decision to sell Suarez in a touching tribute to his close friend. The Argentine icon is not only close friends with Suarez but was his neighbour when the pair played up front and Barcelona and Messi admitted he will miss the Uruguayan striker.

On Friday Messi posted on Instagram: ‘It will be strange to see you with another shirt and much more to face you. ‘You are one of the most important players in the club’s history, achieving important things both as a group and individually. And not to get kicked out like they did. But the truth is that at this point nothing surprises me.

‘I wish you all the best in this new challenge. I love you very much, I love you very much. See you soon friend.’Paris Saint-Germain Neymar, who himself left Barcelona in 2017 to join the French giants, commented on Messi’s post: ‘Incredible how they do things,’ alongside a face palm emoji.

Suarez arrived at Barcelona from Liverpool in a £65million fee and has won four LaLiga titles, four Spanish Cups, the 2015 Champions League and Club World Cup titles with Barcelona. The Uruguayan forward could face his former side when Barcelona visit the Wanda Metropolitano on November 22, while he is likely to be in the side when the return fixture at the Camp Nou takes place on May 9.