Cardi B real name Belcalis Marlenis Almánzar, has come out strong to state that she would rather die broke than join the occultic world of Illuminati. Cardi B cleared the air recently after her new photo sparked Illuminati speculations. Her costume pointed in the direction of Illuminati.

Illuminati is a name given to several groups, both real and fictitious. Historically according to Wikipedia, the name usually refers to the Bavarian Illuminati, an Enlightenment-era secret society founded on 1 May 1776 in Bavaria, which is today part of Germany. Aside from that, most successful personalities especially in showbusiness are believed to have leveraged Illuminati to get their fame and fortune. 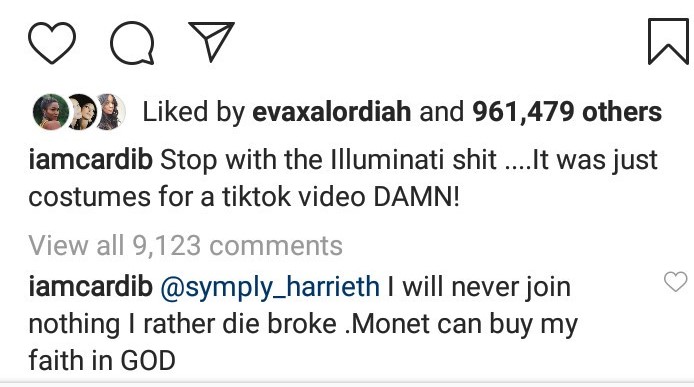 But Cardi B, the American rapper, songwriter, television personality, and actress has said her faith in God would not allow her sale her soul to the devil in whatever guise. Born in Manhattan and raised in the Bronx, New York City, she became an Internet celebrity after several of her posts and videos became popular on Vine and Instagram.

She also took to Instagram to share a photo of herself while reminding the world she’s now single. However, the nature of the photo led to speculations she has been initiated into the Illuminati. In the photo, the rapper is seen wearing a red latex jumpsuit with a red hairband in the form of horns. “Single, bad and rich. I do the controlling,” she captioned the photo. But, people commented, claiming she was indirectly announcing her entry into the Illuminati.

Cardi B reacted by sharing another photo of herself in an angel costume, with diamonds covering her private parts and white wings sticking out behind her. “Stop with the Illuminati shit …It was just costumes for a tiktok video DAMN!” she captioned the photo. She added in the comments of her post: “I will never join nothing. I rather die broke. Money can’t buy my faith in God.”