This season’s Champions League final will not be an -all-French final as wished by some PSG players who booked their spot in the finals a day before Bayern. However, the score line suggests 90 rather uneventful minutes, progressing entirely as expected to a very foreseeable conclusion. The reality was nothing of the sort.

And not only because the two-goal hero of the night was Serge Gnabry, who famously couldn’t get a game at West Bromwich Albion, let alone Arsenal. The real shock was that Lyon had the best of the chances. Really, they did. Bayern Munich were the better team overall and got the job done, by a sizable margin, they may well do so again on Sunday, when they will start the final as deserved favourites to beat Paris Saint-Germain.

Yet this was no walkover, no stroll in the Barcelona park. If Lyon could finish, they could have won. Munich had more possession, kept the ball well, were the better passers, the superior collective. Yet Lyon had spells at the start of both halves when they carved Munich’s defence open but failed to demonstrate the confidence that had undone Manchester City. So, they lost. Yet Paris Saint-Germain, with better finishers across the team, particularly in the front three, will have seen plenty to work with here. Munich’s flat back line is vulnerable and their greatest weapon last night – Gnabry’s left foot aside – was quite possibly the belief that they would not fail.

In direct contrast to Lyon, Munich played with the sense of ownership that leads a handful of elite clubs to dominate this tournament as if by right. Everyone thought they would win, and Munich played as if they were convinced of it, too. Their response to a significant period of first-half domination by Lyon was to score two goals in 14 minutes, which as good as took the game away from them. 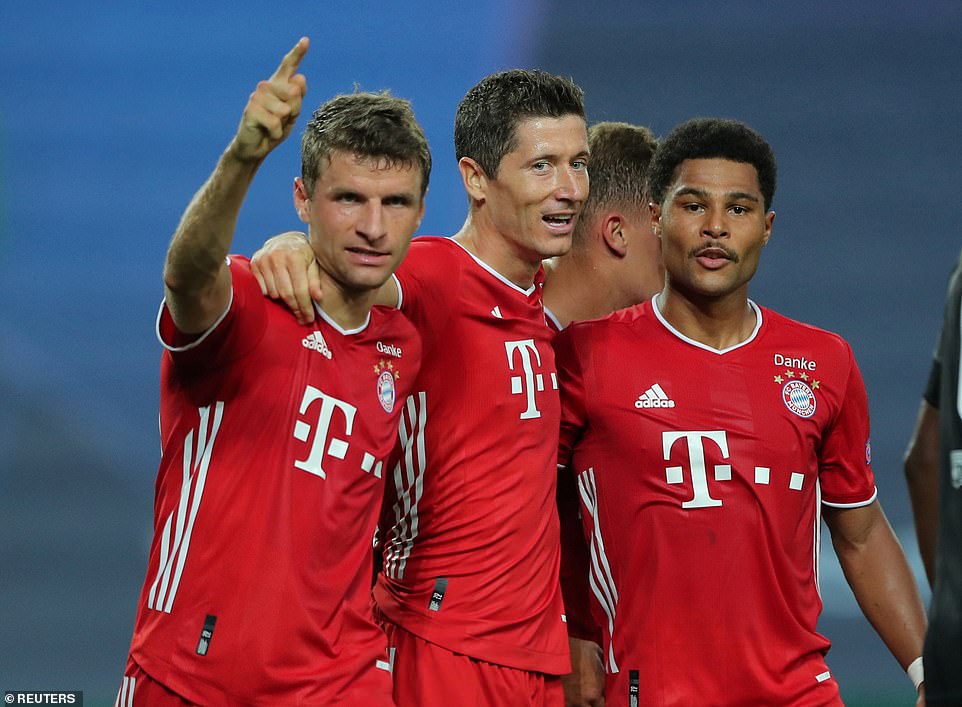 Gnabry got both of those: the first a cracker, the second a tap-in that came from being in the right place, at the right time. He has certainly been that in Europe this season: the pair here brought his 2019-20 total to nine goals in as many Champions League games. The pity was, Lyon did not play badly. Not to begin with, anyway. If anything, until the moment when Gnabry opened the scoring, they were outstanding.

Better than Bayern, certainly better than Barcelona last week. A step up, even, on the performance against Manchester City. In the earliest exchanges, Lyon were as good as any team we have seen in this UEFA mini-tournament. Except in one, vital, area. They could not score. Had Lyon been better in front of goal, who knows what alarms they would have set off in Bayern’s defence? It is not their strong point, we know that.

Even putting eight past Barcelona, Munich looked unsteady. So had they gone one, maybe two, even three down in the opening 16 minutes – and it could have happened – they might have been plunged into the sort of mental crisis Barcelona faced last Friday.

Instead, Lyon let their advantage slip and were caught on the counter-attack. Done again after 32 minutes, that was it. The moment had passed and the game drifted for spells as if Lyon knew it. But what a moment it could have been. The game was four minutes old when Thiago Alcantara gave the ball away sloppily in midfield and it was struck swiftly into the path of Memphis Depay, whose run split Munich’s central defenders leaving only Manuel Neuer to beat. Depay took it wide, as Munich’s goalkeeper tried to jockey like a defender, terrified of committing and giving up the penalty.

Had Depay taken maybe one more stride to the right, his angle would have improved immeasurably; instead he gambled on the tightest of margins and hit the side-netting. It was a huge opportunity, and Depay’s face suggested he knew it. Brilliant by Neuer, though. Under pressure, Neuer dealt with a cross from Leo Dubois less convincingly soon after, before Depay went wide again.

It was all Lyon and scourge of Manchester City, Maxwell Cornet, should have done better from the next attack, breaking down the right with Karl Toko Ekambi in space at the far post. His cross did not make it past the first Bayern man, Jerome Boateng at full stretch to cut it out. Munich were reeling now, and when Ekambi collected the ball close to goal after 16 minutes, the disarray at the back showed. He glided past Alphonso Davies, left David Alaba on his backside and then tried to beat Neuer at his near post, his low shot rebounding off the woodwork. It was a sliding doors event. Within two minutes Munich were a goal up and never really looked back.

What a wonderful goal it was, too. As fragile as Munich can be at the back, they are imperious going forward. Joshua Kimmich played a ball into the right channel where Gnabry was waiting. He cut inside with Lyon too slow to close him down, before unleashing a shot that flew past goalkeeper Anthony Lopes into the top corner. It was the signal for Munich to get on the front foot at last, with Gnabry at the heart of it all.

He nearly grabbed a copycat second after 25 minutes, cutting inside from the right again, before, with one tiny error, Lyon handed over the tie. It was a fine run down the left by Ivan Perisic – on loan from Inter Milan, so he could have had his pick of European finals this weekend – but Jason Denayer entirely missed his chance to clear, stepping over his cross as if performing a dummy. Maybe that is what surprised the normally infallible Robert Lewandowski, who had the simplest tap in, but somehow contrived to both a) miss his kick and b) fall over.

Gnabry to the rescue, then, collecting the loose ball and smashing it into goal from inside the six yard box. At first it looked as if Lewandowski was going to dispute the legitimacy of this finish and claim he had already got it over the line. Typical striker. If so, he quickly came to his senses and laughingly congratulated his team-mate for saving his embarrassment. Lewandowski has come to the rescue of others enough times to be owed one.

And Gnabry was doing his best for him, too. In the 38th minute, a quite magnificent cross from the right was an inch away from gifting Lewandowski Munich’s third at the far post. Had that gone in, there would have been no way back for Lyon; instead they started the second half with a puncher’s chance, and proved as much with a couple of early opportunities.  Marcelo had a header from a Depay corner picked out by Neuer, but Ekambi’s miss after 59 minutes from a cross by Houssem Aouar, rekindled memories of the first half. He hit it straight at Neuer. Back home, Manchester City will have been cursing that such wastefulness did not inflict Lyon earlier.

Could Lewandowski score? He always scores, and he did again after 87 minutes, taking his run in this competition to nine straight scoring matches, equalling Ruud Van Nistelrooy’s stretch in 2003 but behind Cristiano Ronaldo’s 11 in 2018.

He needs two in the final to equal another Ronaldo scoring record: 17 Champions League goals in the 2013-14 campaign. Last night’s was a straightforward finish by his standards – a strong header from a Kimmich corner when Lyon’s fate was presumed. It is ten straight Champions League wins for Munich now, another tournament record. There is considerably more at stake on Sunday night, mind, when a French team with a considerably steadier eye for goal may give Munich their sternest test of the season.