The people of Edo State ignored all the plea by the disgraced National Chairman of the ruling All Progressive Congress (APC) party Comrade Adams Oshiomhole who reportedly knelt down from one end of Edo State to the other asking Edo people to vote against the Peoples Democratic Party (PDP). He begged them to vote for his candidate Pastor Osagie Ize-Iyamu.

Edo people also ignored the video from the former Lagos State Governor Senator Bola Ahmed Tinubu released at the wake of the just concluded governorship elections in Edo requesting them to vote for the APC. Edo people appeared to have thronged out on Saturday September 19, 2020 to register their displeasure with the godfatherism politics of both Tinubu and Oshiomhole as well as the government of the APC as they overwhelmingly voted the Peoples Democratic Party (PDP) and incumbent governor who recently dumped the APC for the PDP few months to the election.

Obaseki dumped the APC when it became obvious that Oshiomhole and the APC would not back him for a second term in office. Oshiomhole wanted to start the dangerous practice of deciding who becomes Edo State governor, which his party man, Tinubu had mastered over the years in Lagos State. He forgot that Edo State is not Lagos State with a docile population that has refused to rise up to godfatherism. 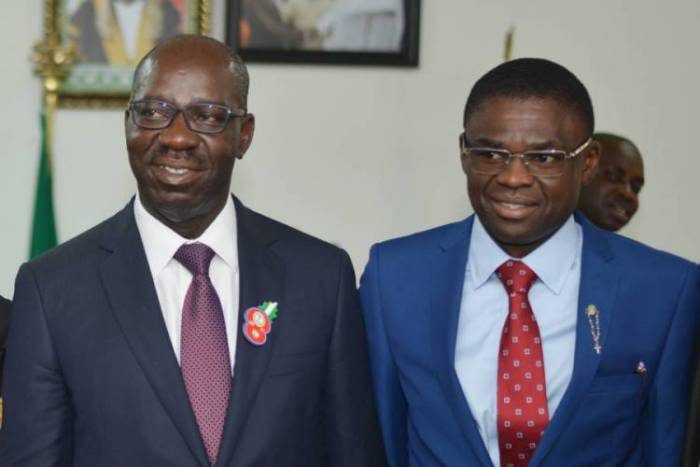 But after the high-tension election, which made the APC government deploy over 30,000 policemen to the state even though the federal government would not deploy such number of police to monitor the killings on Abuja-Kaduna road and Lokoja-Okene road, Edo people refused to be intimidated by the antics of the ruling party as the came out in their thousands to vote for Obaseki and the PDP leaving the Independent National Electoral Commission (INEC) with no other option than to declare the candidate of the Peoples Democratic Party, Godwin Obaseki, winner of the governorship election in Edo State.

The INEC’s Returning Officer, Prof. Akpofure Rim-Rukeh, announced the result of the election on Sunday. Obaseki of PDP polled 307,955 votes to defeat his closest rival, Osagie Ize-Iyamu, of the All Progressives Congress, who got 223,619 votes. Rim-Rukeh, while declaring Obaseki winner, said the incumbent governor was returned elected after satisfying all requirements in line with the law. Obaseki of PDP ran against APC standard-bearer Ize-Iyamu and 13 others.

Obaseki was elected on APC’s platform in 2016 but defected to the PDP after being denied the ticket owing to intra-party squabbles spearheaded by the leadership of the APC.