Reports from North London have it that Mesut Ozil’s time at Arsenal could be over as soon as next week after his agent confirmed that the out-of-favour star is making up his mind on his next move.

The news follows another report in Turkey on Wednesday, which suggested that the £350,000 a week outcast, who has been frozen out by Mikel Arteta this season, had agreed to join Fenerbahce this month. In the midst of all these, Ozil’s agent, Dr Erkut Sogut, has revealed that the former Germany international is undecided about whether to leave in January amid interest from clubs in America, Asia and Qatar. He told ESPN.

“I can’t talk about the clubs directly because it would be unprofessional but generally, there is six months left on the contract and it is nothing unusual that we will talk to people about different opportunities and try to find the best option for Mesut. He might stay at Arsenal until the summer, but he might go. Mesut’s priority is to stay but you never know in football, things can change very fast. For the moment, we are just checking all the options for January and the summer. 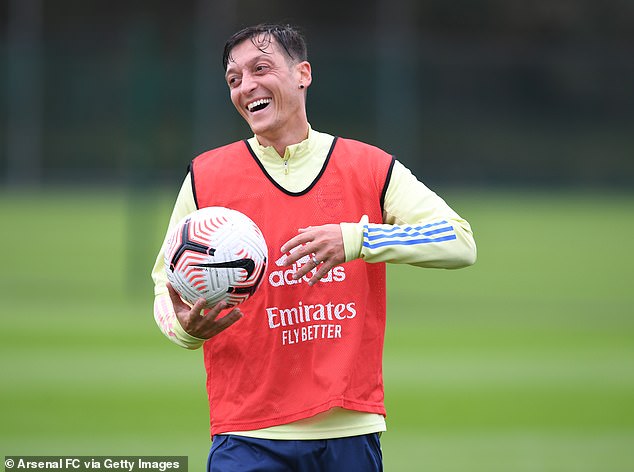 ‘If we want to leave in January, I need to talk to Arsenal. If we sign for the summer, we don’t need to. That’s the situation. In the next seven to ten days, it will be a little clearer as now the transfer window is open, things can move faster.’

Ozil’s time at the Emirates had appeared to finally be over after the midfielder reportedly agreed to join Turkish giants Fenerbahce, although ESPN claim that there is no agreement in place with any club. Ozil, who joined the Gunners from Real Madrid in 2013, has barely been used by manager Mikel Arteta and was not included in his squad this season.

The door for his exit at Arsenal was opened last year, with Turkey emerging as a possible destination due to the player’s strong links with the country. Reports in Turkey had suggested a switch to Fenerbahce would be a ‘dream move’ for the 32-year-old. It was claimed that he had agreed a three-and-a-half-year deal, with the Gunners paying his wages for the first six months of his Fenerbahce contract, worth £4.5m a year. The report also stated that Ozil would receive a signing on fee of £2.2m.

Ozil, who has also been in talks with US side DC United, fueled speculation by posting a throwback picture on Tuesday night of him in Istanbul with the caption: ‘This city.’ Istanbul-based news outlet DHA reported that Ozil was ‘convinced’ to join Fenerbahce by Turkish media mogul and close friend Acun Ilicali. It has also been reported that Ozil is building a luxury villa next door to club president Ali Koc.

Ozil’s links to Turkey extend to the country’s controversial president Recep Tayyip Erdogan, who was best man at the player’s wedding to Amine Gulse in 2019. However, it now appears that Ozil has not yet agreed on a move to Turkey, with a number of clubs interested in signing him this month or for free in the summer. Ozil had been firmly out of favour at the Emirates under Arteta and was left out of both official squads for the Premier League and Europa League this season having not played for the Gunners since March 7 last year.

Arteta hinted recently that Arsenal’s big earners would have to leave the club in January, adding: ‘We cannot sustain the numbers we have.’ Ozil could yet see out his current deal at the Emirates, which will expire this summer. Arsene Wenger, who signed Ozil from Real Madrid in 2013 for then a club-record fee of £42million, suggested last month that Arteta should work with the midfielder to help him rediscover his best form.

Wenger worked with Ozil at Arsenal for five years – a period in which the club won the FA Cup three times – and remains the only manager at the Emirates to get the best out of the 2014 World Cup winner. Wenger told ESPN’s Caught Offside podcast: ‘He was not difficult to manage. He was a guy who had a special quality as a creative player and needed to have fun.

‘He is an artist, and these guys are a bit more sensitive. They need support and an environment that pushes them to give their best. You have two ways to see a football team. You get everybody to do the same – the same intensity of work, the same defensive work – or you find a compromise.

‘You have a more creative player in the team who can do less defensive work, but you build a team around him who can compensate for these deficiencies. That is what you have to think about.’