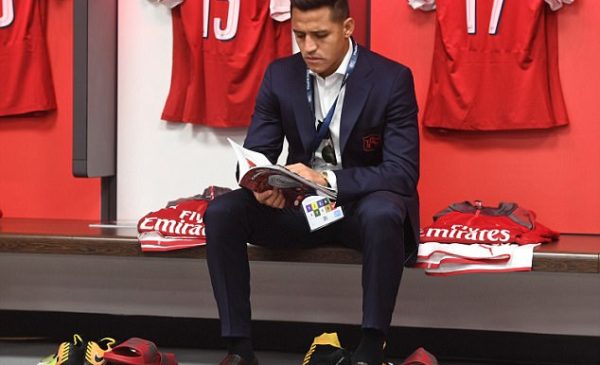 According to reports from the United Kingdom leading online publication, Mail, Alexis Sanchez looks set to stay at Arsenal for another season at least after joining in with the Community Shield celebrations at Wembley. The Chile forward has been in a contract stand-off with Arsenal for over a year and looked to be trying to force a move, but his options are becoming limited, not least due to Paris Saint-Germain’s signing of Neymar. Arsene Wenger has long hinted that he is not prepared to let Sanchez leave, even if he sees out the final year of his contract and leaves for free next summer, and the player was paraded at Wembley despite not being named in the match day squad.

Dressed in shirt and suit trousers, like Ozil, Gabriel, Carzola and the like, Sanchez walked around the pitch after his team-mates saw off Chelsea in a penalty shootout on Sunday. Some Gunners fans might have got the jitters by the sight of Sanchez waving to the crowd – often interpreted as a sign of saying goodbye when a player is the subject of intense transfer speculation. But Wenger confirmed that Sanchez had not been involved due to his ‘lack of preparation’ – he was given an extended summer break after Chile’s involvement in the Confederations Cup. The 28-year-old, who has been Arsenal’s star player since joining from Barcelona in 2014, gave his team-mates hugs after the match and looked to be enjoying himself as he walked around the pitch.

He looked a little sheepish as he hung around the fringes of the match day squad while they toasted the Community Shield win by spraying champagne and posed for photographs with their trophy. Mesut Ozil, who is also yet to sign a new contract after a long impasse, was another to miss out on the match due to fitness concerns ahead of the new season, which starts for Arsenal against Leicester at the Emirates Stadium on Friday night.

Ozil and Sanchez appeared relaxed as they watched the match together on the bench and shared a laugh as they strolled around Wembley afterwards. Both players have been considering their options for a move away from north London but have seen potential destinations gradually eliminated. Sanchez is still wanted by Manchester City and Chelsea but Wenger is adamant that he will not sell to a Premier League rival. Bayern Munich were early favourites for his signature but made no secret of their interest ending after hearing Sanchez’s financial demands. PSG emerged as front-runners, but their £198million deal for Neymar has fulfilled their requirement for a big-name forward. That leaves another season at Arsenal as possibly Sanchez’s only option.