Nigeria’s former President Goodluck Jonathan is 63 years old today. President Jonathan is remembered by his famous saying that “…his ambition for re-election as Nigeria’s President is not worth the blood of any Nigerians…,” is today celebrated globally as a true democrat who did not want unnecessary blood spill when the then opposition party – the All Progressive Party (APC)-led by President Muhammadu Buhari were beating drums of war if it failed to unseat Jonathan at the time. Jonathan is of the Peoples Democratic Party (PDP), the largest political party in Africa.

Then, the APC sponsored all sorts of propaganda and at the end of the day, Buhari won the election and the rest as they say is now history. But as the former president marks 63 today, Buhari, the man who took over from him, is joining hundreds of thousands of other well-meaning Nigerians to wish him well. Similarly, the former Deputy Senate President, Ike Ekweremadu, the Delta State Governor, Sen. Ifeanyi Okowa as well as the Yobe State Governor, Mai Mala Buni (who is celebrating 53) have felicitated with former President Jonathan who is fondly called GEJ.

A statement Thursday in Abuja by the President’s Special Adviser on Media and Publicity, Mr. Femi Adesina, said: “On behalf of the Federal Government and Nigerians in general, President Buhari warmly felicitates with former President Jonathan on his 63rd birthday on November 20, 2020, congratulating him for a life of service that has brought honour and goodwill to the country. The President notes, with appreciation, the peculiar and remarkable climb of the former President on Nigeria’s political ladder, and dedication that has kept him working most recently as ECOWAS Envoy to bring peace to the Republic of Mali. 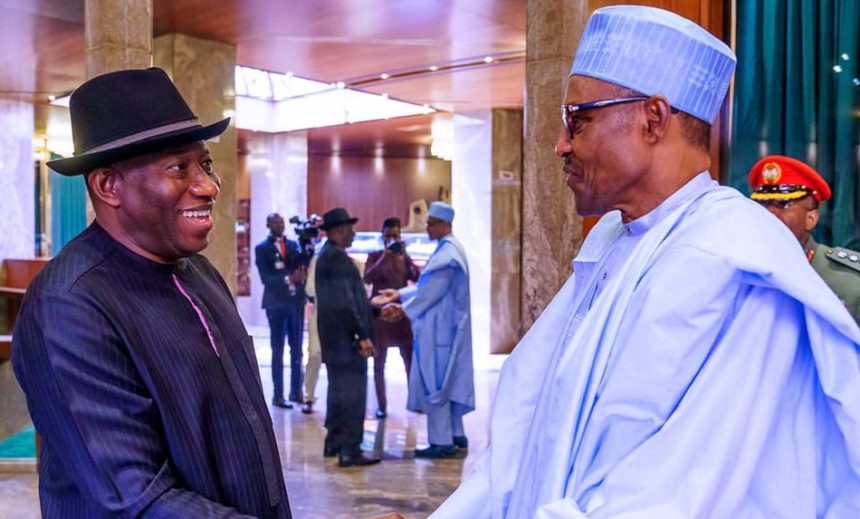 “As the former Nigerian President turns 63, President Buhari prays that the Almighty God will grant Dr Jonathan longer life, good health and more wisdom to keep serving the nation and humanity.” Ekweremadu hailed Dr. Jonathan for his democratic temperament and selfless leadership. “Jonathan’s democratic temperament was indeed a facilitator and great boost to the millage we covered in reforming the nation’s electoral system, especially in the Sixth National Assembly,” he said.

In a statement in Asaba, the state capital, by his Chief Press Secretary, Mr. Olisa Ifeajika, Governor Okowa said: “…Your administration will long be remembered as the government that practised the rule of law and freedom of expression, as there were no records of human rights abuses throughout your tenure.

“As our dear former President clocks 63 years today, it is my prayer and that of millions of Nigerians that God will continue to strengthen him in his avowed commitment to ensuring greater peace, good governance and enduring democracy in Africa.”

President Buhari also communicated good wishes to Yobe State Governor Mai Mala Buni as he clocks 53 years of age. In a statement by his Senior Special Assistant on Media and Publicity, Mallam Garba Shehu, the President hailed the governor, who is also the Chairman of All Progressives Congress (APC) Caretaker Extraordinary National Convention Committee, for his commitment to the growth and peace of the ruling party.

“President Buhari felicitates with Governor Buni on the joyous occasion of his 53rd birthday anniversary. The President also joins the family, friends, political associates, government and people of the state in celebrating with the hardworking governor as he devotes his time to delivering dividends of democracy.”