In the blasted landscape of a near-deserted Wembley, in front of the blank gaze of battalions of empty seats at the first FA Cup Final to be played without fans, an Arsenal team that has been withering and dying bloomed again like a red rose in a desert. This is a cold climate for football and for our society but Arsenal have found love in it.

Most of all, they played like a team that has learned to love itself again. For as long as anyone can remember, certainly through the declining years of Arsene Wenger’s management, they looked like a team ill-at-ease, uncertain and vulnerable.

Finally, in our empty stadiums and sterile atmosphere, they have started to look like a team that is learning to enjoy its football again. When they came from behind to beat Chelsea and win the FA Cup for a record 14th time, their victory seemed to mean an awful lot more than qualifying for the Europa League next season.

It meant their quarter of a century of participation in European competition will continue but more than that, amid all the gloom of these troubled and strange times, it signalled hope and optimism for their future. This victory, coupled with the semi-final triumph over Manchester City, has wiped out the disappointment of their eighth-place finish in the Premier League and has brought huge credit to their rookie boss Mikel Arteta. 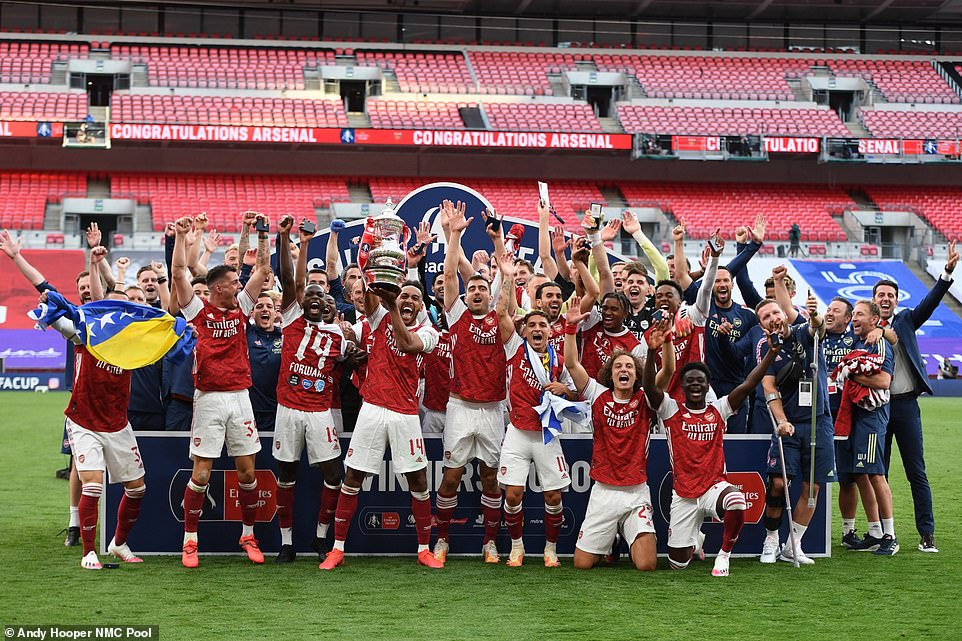 Perhaps the empty stadiums have given them space to breathe. Perhaps it is no coincidence that they have begun to flourish away from an Emirates Stadium that can quickly turn toxic. Arteta and his players certainly celebrated like this was a result of huge significance. It may also help that, after falling behind to an early goal from Christian Pulisic, they overhauled Chelsea with two goals from their captain, talisman and prolific striker, Pierre-Emerick Aubameyang. Arteta and Arsenal are trying to persuade Aubameyang to sign a new contract. A victory like this could be a strong persuader.

The defeat ruined Frank Lampard’s hopes of ending his debut season at Stamford Bridge on a high but Chelsea’s Champions League place was already secure, and he can still look back on what he has achieved with great satisfaction.

In Pulisic, the first American to score in an FA Cup Final, he has a player who looks as if he will light up the league next season. A final that started with pop star Emeli Sande being projected on to the big screens singing Abide With Me from high on the stadium roof ended with Aubameyang picking the famous old trophy up from a plinth and carrying it over to his waiting teammates.

He dropped it before he had had time to hoist it. Arsenal will forgive him. As they celebrated, the tinny strains of Good Old Arsenal bounced around the vast expanse of the home of English football and the Arsenal players began an awkward lap of honour.

Arsenal forged their first chance inside three minutes with a lovely move that started deep in their own half when Kieran Tierney dropped his shoulder to deceive Mason Mount and floated a pass down the left wing for Ainsley Maitland-Niles to chase. Maitland-Niles got to the byline, cut back and curled in a cross, which Aubameyang headed wide from six yards out when he should have scored.

Two minutes later, though, Chelsea were ahead. Pulisic has sometimes seemed like an unstoppable, uncontainable force in the matches since the restart and now he played both architect and executioner for the opening goal.

He took the ball in midfield on the half-turn, sprinted forwards and laid the ball out to Mount. Mount played it inside to Olivier Giroud who helped it on and Pulisic skipped past Tierney’s tentative challenge and clipped a clever finish over Emiliano Martinez. Kovacic was lucky to escape with a yellow card for a lunging tackle on Granit Xhaka and even though Pulisic was still causing Arsenal problems, Arteta’s team began to claw their way back into the game after the drinks break when they started to hit more long balls to exploit the space behind the Chelsea defence.

Nicolas Pepe thought he had scored one of the great goals in FA Cup Final history when his curling left foot shot from the edge of the area bulged the net but it was ruled out for offside against Maitland-Niles earlier in the move. 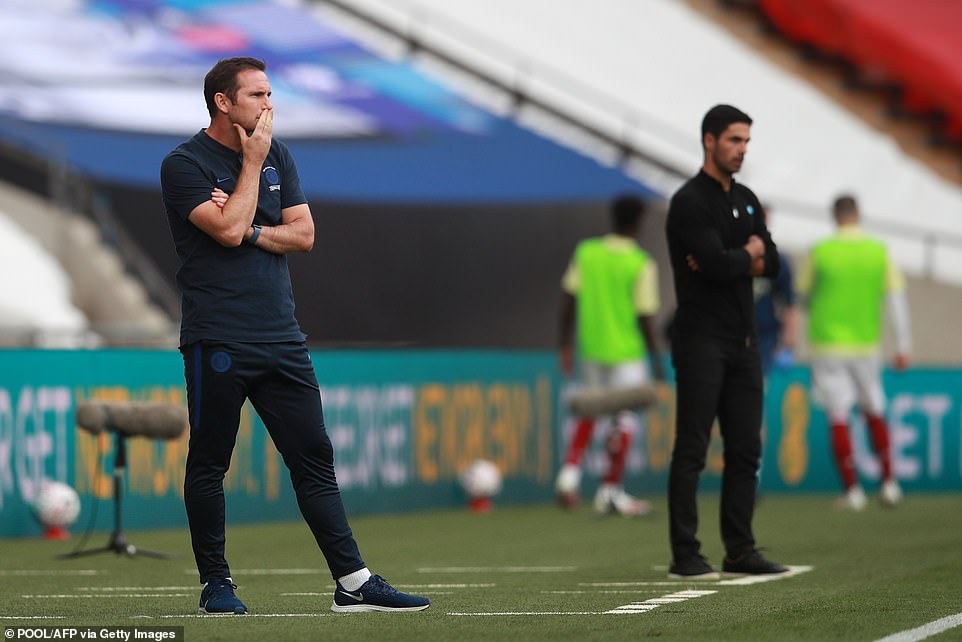 Arsenal were not discouraged, though. Maitland-Niles was causing problems down the Chelsea right and just before half an hour, they targeted the same flank and forced an equaliser. This time, it was Aubameyang who ran on to a long ball from Tierney.

He got the wrong side of Cesar Azpilicueta and even though Azpilicueta appeared to drag him back outside the box, there was enough contact inside the box for the referee to award a penalty and for VAR to confirm it. Aubameyang dispatched it past Willy Caballero with aplomb.

Azpilicueta, who was shown a yellow card for his foul on Aubameyang, was substituted with an injury ten minutes before half time and his replacement, Andreas Christensen, nearly gave away a penalty when he was bamboozled by Pepe and tripped him on the edge of the area in injury time. Alexandre Lacazette drove the free kick inches wide. A minute after the interval, Pulisic began the second half as he had the first, bursting through the Arsenal defence and bearing down on goal. Thirty yards out, the American forward began to grimace in pain. He kept going long enough to slice a shot wide but then he collapsed to the ground in agony with what looked like a hamstring injury. He was taken off and will surely be a doubt for Chelsea’s Champions League second round second leg tie against Bayern Munich on Friday.

Arsenal were still playing with poise, though. They looked like they were relishing the game. Their attitude was personified when Pepe took the ball midway on the half way line with his back to goal and flicked it through Antonio Rudiger’s legs with a backheel. It was champagne football mixed with pragmatism. Altogether most unlike the Arsenal we have come to know in recent years.

Just before the second drinks break, Arsenal took the lead. The ball broke to Hector Bellerin inside his own half and he drove forward, bursting past Rudiger towards the edge of the Chelsea box. Christensen brought a sudden end to his run with a perfectly timed tackle, but the ball broke to Pepe on the Arsenal right.

Pepe saw Aubameyang in space on the left and played the ball across the area to him. Aubameyang squared up Kurt Zouma, jinked past him and lifted an expert finish past Caballero. Chelsea’s chances suffered another blow five minutes later when Kovacic fouled Xhaka again and was sent off for a second bookable offence by Anthony Taylor. Arsenal suffered one alarm when Martinez appeared to have gathered the ball outside his box but Mr Taylor waved play on and the comeback was soon complete.