News emanating from the English Premier League organisers has it that Fulham’s Premier League match against Burnley has been called off after further coronavirus (COVID-19) cases at the club. The Cottagers’ clash with Tottenham last Wednesday was postponed at late notice following an outbreak in the Fulham camp.

More positive tests have come through as well as the cases earlier this week, so the fixture set to kick-off at midday on Sunday has officially been postponed. Scott Parker’s side were set to train on Saturday morning and travel up to Burnley in the afternoon, but the players were ordered not to go into the Motspur Park training ground.

Fulham boss Parker previously missed the Southampton match on Boxing Day when someone in his household tested positive. This is the fourth Premier League game to be cancelled this campaign, after Fulham against Tottenham on December 30, Newcastle against Aston Villa on December 4 and Manchester City against Everton on December 28.

A Premier League statement said: ‘The match between Burnley v Fulham has been postponed following a Premier League Board meeting this morning. ‘After the postponement of their match against Tottenham Hotspur on Wednesday, Fulham’s players and staff were immediately retested and this morning have reported a further increase in positive COVID-19 cases.

‘Following Fulham’s request to rearrange the Burnley fixture, the Premier League’s Board has taken into consideration further independent medical advice and decided to postpone the match due to the exceptional circumstances of the ongoing outbreak at the club. 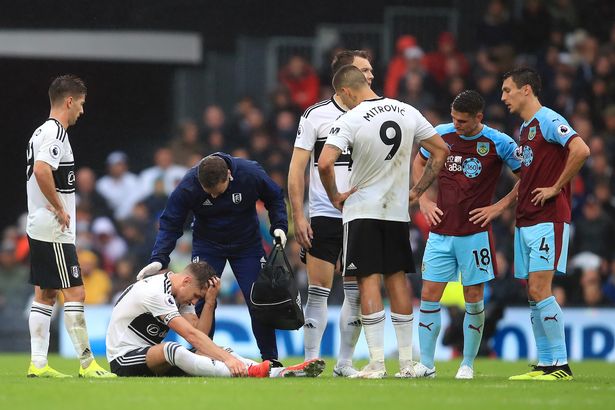 ‘With the health of players and staff the priority, the League and Fulham will agree a further action plan to control the outbreak to allow the club to resume their season safely. Players and staff will now be retested as part of a revised testing schedule.

‘With low numbers of positive tests across the overwhelming majority of clubs, the League continues to have confidence in its COVID-19 protocols, fully backed by the Government, to enable fixtures to be played as scheduled. ‘The League wishes those with COVID-19 a safe and speedy recovery and will rearrange Fulham’s two postponed games as soon as possible.’

Fulham stated: ‘Following further new positive results returned from the most recent Covid-19 tests, the Club can confirm this Sunday’s away fixture at Burnley has been postponed after discussions with the Premier League and advice from medical teams.

‘Those who tested positive are self-isolating in line with UK Government and Premier League guidance. ‘The welfare of our players, staff and their families continue to be of paramount importance, and we wish those who have tested positive a safe and speedy recovery.’

Burnley released the following statement: ‘Burnley Football Club can confirm the Premier League game against Fulham, due to take place at Turf Moor this Sunday, January 3, has been postponed. ‘The Premier League have advised the postponement of this game following a Covid-19 outbreak that has affected our visitors.

‘All at Burnley Football Club pass on our best wishes to those in the Fulham camp affected, and wish them a speedy recovery. A new date for the game will be announced in due course. ‘Burnley’s next game will be the FA Cup third round tie at home to MK Dons, on Saturday, January 9 at 3pm, followed by the rearranged Premier League game against Manchester United at Turf Moor on Tuesday, January 12 (8.15pm). ‘The annual ‘In Memoriam’ tribute, planned to take place this Sunday, will now happen ahead of the United game.’

AFC Wimbledon manager Glyn Hodges, whose side face Lincoln on Saturday afternoon, said in the club’s programme: ‘It’s time now for football to go into hibernation for a few weeks and if it means extending the season so be it. ‘If it were left to me this game would have been called off. COVID has hit us again, and we have five players either going into isolation, or already there. The current situation is worrying us and the EFL pushing us to complete a fixture.

‘The EFL are giving little guidance. Spurs and Fulham had their game called off because a few in each camp had COVID, yet we are being told to play. Premier League clubs can carry one or two absences, but in the lower leagues that is impossible.

‘Thousands have died, yet football at our level is being asked to carry on regardless. The bosses running our sport need to sit down and take stock of the situation, at the moment it’s a crazy one.’