In-form Smith Rowe had an eventful evening after arriving as a second-half substitute, seeing a red card rightly rescinded before opening the scoring. Aubameyang tapped in the second after a slick move cut Newcastle open. Andy Carroll missed two golden chances in normal time, which could have sent Arsenal to a rare third-round exit.

The Gunners, who have won the FA Cup on a record 14 occasions, go into the fourth-round draw having beeen knocked out in the third round just once in the past 25 years. But it could have been different had 32-year-old striker Carroll been able to convert his opportunities, particularly the second, which came in the final minute of normal time.

Arsenal would have had little time to recover from that and they had keeper Bernd Leno to thank as he reacted quickly to spread himself to smother Carroll’s shot. That chance came after former England striker Carroll had been unable to take another opportunity early in the second half, staying onside but side footing wide. 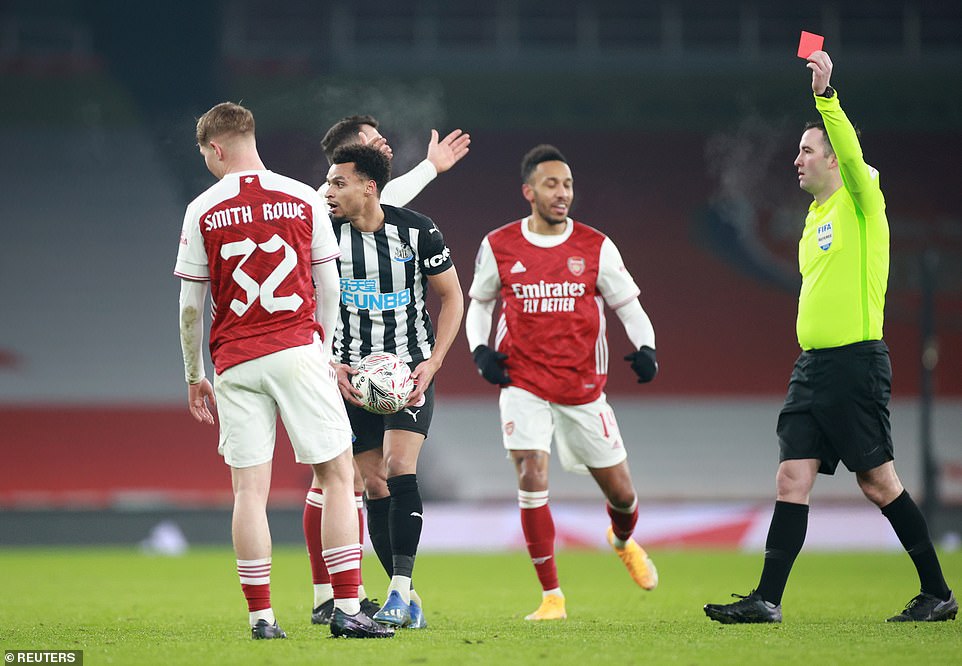 “It can only be defined as an absolute sitter,” former Newcastle and England striker Alan Shearer said afterwards. Instead, it was a player at the other end of his career who took the plaudits. Smith Rowe, with his energy and willingness to carry the ball, has added another dimension to Arsenal’s attacking play in recent weeks.

After an insipid first half, the England youth international was brought on as a 56th-minute substitute by Gunners boss Mikel Arteta and quickly became the game’s central character. In the dying moments of normal time, he was shown a straight red card by referee Chris Kavanagh for a challenge on Newcastle midfielder Sean Longstaff, only for the official to overturn the decision after watching the incident again on the pitch side monitor.

On being able to stay on the pitch and then precisely fire in the crucial goal, Smith Rowe said: “I was really happy. It was a bit of a relief after the incident before, which definitely wasn’t intentional. I am happy to get the goal and get through to the next round.”

Impressed with the performance, Arsenal boss, Mikel Arteta said, “It was very impressive from Emile Smith Rowe because is playing with a lot of personality, a lot of risk. He is playing in areas where he needs to make things happen and he has got the talent to do it.”

On Arsenal’s recent form, Arteta said, “We want to keep going and win more games. It’s always important to stay in the competitions. We want to fight for this competition again, so today was a big game for us.”

Similarly, Newcastle boss Steve Bruce in his reaction after the game said, “You have to take your chances when they come along. We had the opportunity in the final few minutes and didn’t grasp it. As a cup tie, it could have gone either way and we rue the missed chances.

“I thought Andy (Carroll) did fantastically well. If he had topped it off by scoring a goal, it would have been good for him. There were a lot of pleasing things. We’ve had a tough run of fixtures, but we dust ourselves down and go again.”