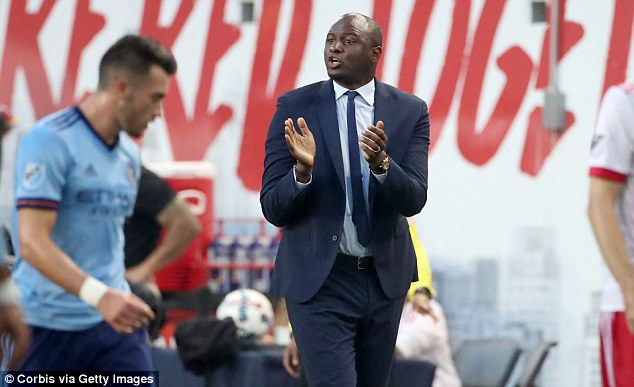 Former Arsenal Captain, Patrick Vieira has been speaking about the spineless performance of Arsenal against Liverpool last Sunday. The harrowing experience at Anfield would never have happened on the Frenchman’s watch. Not for the first time, Wenger’s non-firing Gunners were lucky to leave Liverpool trailing by only four goals. They lost 5-1 in 2014 and were equally abject, gutless and spineless at the weekend. More than 3,000 miles away, Vieira would have grimaced when he heard the 4-0 result. The Frenchman is manager at MLS franchise New York City.

Now 41, according to Dailymail report, Vieira remains a commanding figure. He marches round the club’s training complex an hour’s drive north of Manhattan with an authority reminiscent of his playing career. When Vieira speaks, his players listen. Arsenal, however, is never too far from the forefront of his mind, probably even more so after Sunday’s cowardly display. Vieira was the embodiment of all that was impressive about Arsenal under Wenger. Powerful, brave and authoritative.

He could play a bit too, just ask Roy Keane. Twelve years after he left north London for Juventus, there remains a Vieira-shaped hole in the heart of Arsenal’s midfield. The void isn’t lost on Vieira. ‘If you look at Arsenal today I really enjoy watching them play, they play some really good football,’ he says. ‘But that is not enough to win football matches or to win competitions. In our time we were winning and we had the strength to not play well but somehow manage to win the game 1-0.

‘I’m not one to say, “Our generation was better than this generation”. It doesn’t make sense to compare the two generations because we are in a different period. ‘The team in our generation were more physical but this generation are better football players, there’s no doubt about that. So the balance is what Arsenal need to find. We had the physicality to deal with different situations.’

Incredibly, Vieira says he wouldn’t pick himself in his own starting XI now he’s a manager. ‘Now I’m coach, if I had a player like myself maybe he’d be on the bench,’ he says with a wry smile, tongue firmly in cheek. Wenger wouldn’t agree with him. The Gunners manager is crying out for someone like Vieira — he’d be the first name on the team-sheet.

It’s no secret Arsenal lack leaders. Vieira is, arguably, the most dominant captain Wenger ever had in his 20-plus years at Arsenal. But Vieira believes there are players at the Emirates who can take his mantle. ‘You’re not going to tell me Mesut Ozil is not a leader? You’re not going to tell me Alexis Sanchez is not a leader? You’re not going to tell me Petr Cech is not a leader,’ he asserts. ‘I believe there are different types of leaders on the field. You have the technical leader, you have the vocal one, you have the one who doesn’t talk but shows it in his desire and how he competes. ‘I’m more like that: the one who isn’t as vocal as Tony Adams but will show it how he competes on the field. And you have the type of leader who will want to take a penalty in the 95th minute — this is part of being a leader as well. ‘There are leaders in the team to challenge and they have the experience to win matches.’