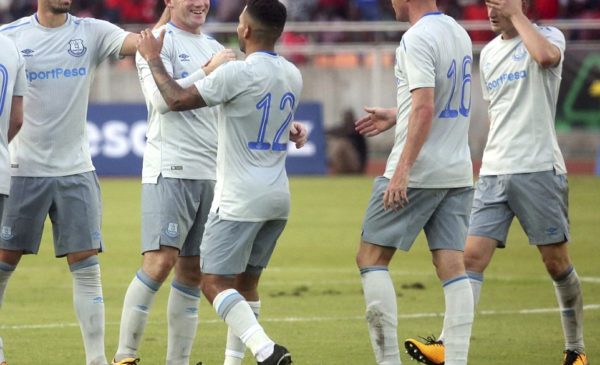 Arsenal and Everton new boys, Alexandre Lacazette and Wayne Rooney have both started their career in their new clubs in a flying start. The duo both scored at the debut in both clubs during the pre-season games. Arsenal are away in Sydney at the famous ANZ Stadium while Everton played against Gor Mohia, a Kenyan side. Both games were played early Thursday. Wayne Rooney joined Everton after 13 years of illustrious career in Manchester United while Alexandre Lacazette joined Arsenal from a French side, Lyon for a record £53million.

Rooney’s goal marked the perfect way for him, playing up front, to announce his return after a 13-year spell at Manchester United. Having put his side ahead in the 35th minute in the club’s first pre-season friendly against Kenyan opponents in Tanzania, he immediately raised his arms to the sky in celebration. However, his joy was short-lived as Jacques Tuyisenge equalised with a near-post header a couple of minutes later. Rooney departed at half-time as manager Ronald Koeman made 11 changes, having given new signing Davy Klaassen 45 minutes, with winger Aaron Lennon making his first appearance since February 11 after receiving treatment for a stress-related illness. But Everton went on to win 2 -1 at the end of the game.

In the other game, Arsenal new signing, took less than 15 minutes to score his first goal for his new employers as they breezed to a 2-0 win over Sydney on the first match of their tour to Australia and China. The Frenchman, who entered the fray on 68 minutes, had the ball in the back of the net on 83, when he calmly slotted fellow substitute Alex Iwobi’s pull-back home from around 10 yards out. Lacazette was handed the number nine jersey following his much-heralded arrival and perhaps gave a glimpse of things to come with a predatory finish. The Gunners had wasted a staggering number of chances to double their lead after Per Mertesacker’s early opener.

But Lacazette made no mistake and Arsene Wenger will have noted his impact. Mertesacker had said he wanted to make his final season a fairytale. He got the first chapter off to a decent start here. Less than five minutes had elapsed when the big man put the visitors, attacking the Jonny Wilkinson End, into the lead – turning on a deflected Mesut Ozil corner from three yards out and volleying into the corner. The finish was considerably better than the celebration, in which the German set off running, jumped in the air and landed on the spot. Regardless, it delighted the vast majority of an impressive 80,432 crowd. This was the first time the Gunners have played Down Under for 40 years and the iconic stadium was awash with the famous red shirts with white sleeves. A shame, then, that Arsenal played in their new, admittedly sleek, third strip of black and grey. Wenger has brought a number of youngsters on the trip and included four in the starting line-up. Reiss Nelson was the pick. The Elephant and Castle-born 17-year-old has pace to burn and superb footwork. He caused the hosts problem after problem with an electrifying opening half on the right.