Nigerians want their President, Muhammadu Buhari to immediately sack the Chief of Army Staff, Lt. Gen Tukur Buratai, for his projection that terrorism in Nigeria may continue for another 20 years. It is sad that a number of times, the Nigerian army had come out to claim that they have killed the the commander of the dreaded Boko Haram sect who will come out in a video evidence to refute the military claim.

Buratai is the General leading the war against the dreaded Boko Haram terrorists, a group that has been operating unhindered in the country for the last ten years. The Information Minister, Lai Mohammed, in explaining the killings of more several Borno farmers, continued to insist that the Boko Haram murderers have been defeated and that the terrorists were only putting up cowardly attacks to gain headlines. 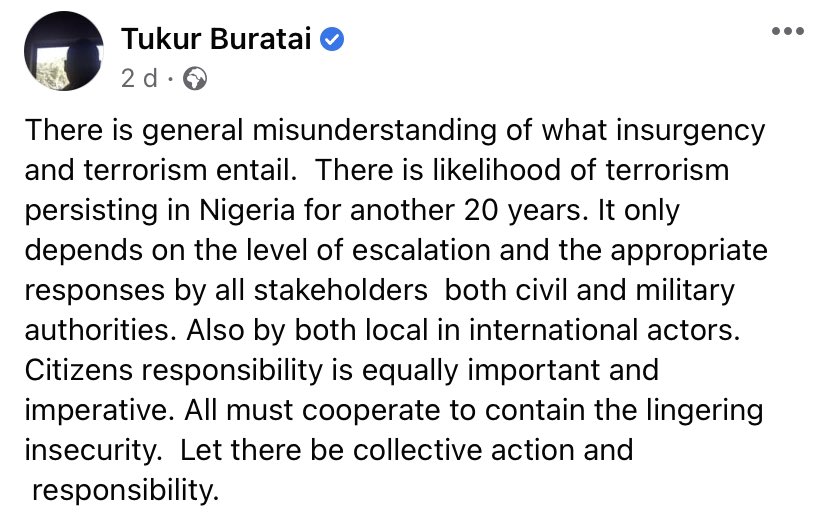 But on the verified Facebook page of the Army Chief – the man President Buhari relies on to prosecute the war against the terrorists, Buratai said Nigerians may have to live with the killings at least till 2040.

He said, “There is general misunderstanding of what insurgency and terrorism entail. There is likelihood of terrorism persisting in Nigeria for another 20 years. It only depends on the level of escalation and the appropriate responses by all stakeholders both civil and military authorities,” Buratai said. This gloomy projection by the army top shot has angered Nigerians who simply ask for his immediate resignation or outright sack.

According to him, the service chiefs are public servants and should be treated like their counterparts in the service.
He said: “He (Buhari) is breaking the law. The law says if you are 60 you must go, it is so automatic. If you are 35 years of service, you must go. In fact, they are not staff of the president, they are the staff of the Federal Republic of Nigeria and there is a rule, it is just like in the civil service. If you are an ordinary civil servant and you hit 60 years, automatically you must go.
“The president hasn’t the right to extend beyond what the law says; that is the rule of law.”