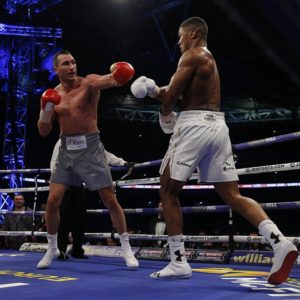 Already the people’s hero in this, his homeland the young British lion gained a whole new planet of admirers as he stopped the legendary Wladimir Klitschko in the 11th round of an epic world heavyweight title war, which took place at the weekend.
As the fight progressed the heavyweight giants went down from sledgehammer punchers in the first half of a brutal battle between two men steeped in mutual respect, Klitschko in the fifth round, Joshua hitting the deck even harder in the sixth.
Then, just as the dream of adding the WBA world title to his IBF belt, appeared to be subsiding into fatigue under the fists of Klitschko’s long-term experience and expertise, Joshua went for the broke and seized stunning victory from the claws of the old champion’s left jab and whiplash right.
A right uppercut from hell halted Klitschko’s clever approach to victory in the penultimate round. He rose but the 14-years younger man (Anthony) who had looked exhausted for some time took an energy charge from that success and dropped him again with vicious left hook. He eventually emerged victorious from the biggest post-war boxing bout held on British soil by knocking out Wladimir Klitschko in front of a 90,000 crowd.
The two titans squared off at Wembley Stadium watched on by the cream of Hollywood’s A-list and millions of fans who watched on television from all corners of the world.
Photo Captions:
1. Anthony Joshua with his backroom staff after pose after the fight
2. Anthony Joshua and Wladimir Klitschko throwing punches during the fight