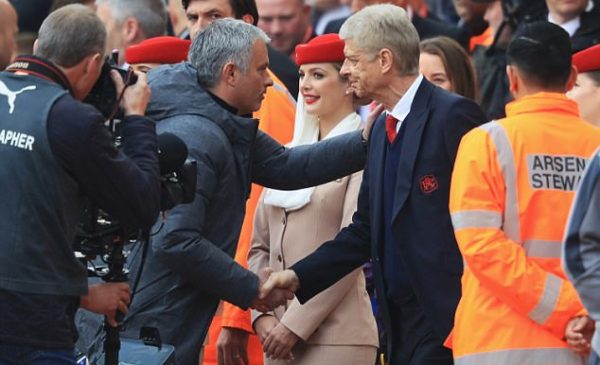 But while the match was unfolding on the pitch according to Sportmail, a UK based online publication, all manner of entertaining things were going unnoticed. A few would surely have been won over by an important win over Manchester United, but before the game a minority of supporters reiterated their dissatisfaction with Wenger’s continued presence at the club. His contract is up next month and a final decision will be announced at the end of the season with the understanding that he will stay and sign a new two-year contract. That is probably not what these fans want to hear, but they at least went home happy.

Their encounters have ranged all the way from a war of words to all-out shoving matches, but Mourinho and Wenger claimed earlier this week they were ready to put their rivalry to bed. Just before kick-off, they put those claims into action as they met between the technical area to shake hands, something that has been publicly absent from their past meetings. There were some Emirates air hostesses on hand to separate them if it kicked off, but as it turned out they were not needed.

Just because Wenger had decided to bury the hatchet with his greatest rival, it does not mean Arsenal fans were automatically going to follow suit. That much was made clear shortly after kick-off when Mourinho’s first appearance on the touchline was met with a chorus of ‘f*** off Mourinho’ from the Arsenal fans, forcing Sky Sports technicians to turn the stadium microphones down. It must have been nice for Wenger to have a manager even more unpopular than he is to deflect the anger he has been subjected to in recent months.

Manchester United fans were feeling pretty chuffed after it appeared some of their own had rented an Emirates executive box and trolled Arsenal’s ‘You Can’t Buy Class’ banner with a clever message referring to Robin van Persie. But it turns out it was just the work of a Photoshop enthusiast with people at the ground soon dispelling the presence of such a thing. That could have happened to anyone, but fans took exception to the fact that Parker was facing the wrong way when the ball hit him. He turned his back on it and England went on to lose 4-3. That is exactly what Ander Herrera was guilty of when Granit Xhaka’s shot took a massive deflection off him and beat David de Gea to give Arsenal the lead.

After Danny Welbeck had given Arsenal a 2-0 lead, it looked like Wenger was going to be celebrating his first Premier League win over Mourinho. That is probably why the Arsenal bench started their celebrations early, cracking open the Maltesers. If they thought they would get away with it, they were dead wrong. TV cameras picked up the exact moment one coach passed them around, inspiring Gary Neville to interrupt Jamie Redknapp’s analysis to ask if anyone else had seen what he had.
We all did, Gary. We all did.

Mourinho is famous for securing points against top sides away from home but, as it turns out, the Special One is not so hot when it comes to actually winning those away games.
According to one amateur statistician on social media, a Mourinho side has failed to score a single away goal against a top six side since Chelsea’s 5-3 loss at Tottenham on New Year’s Day in 2015. The Portuguese has one more chance to break that duck when his Manchester United side travel to White Hart Lane next week.