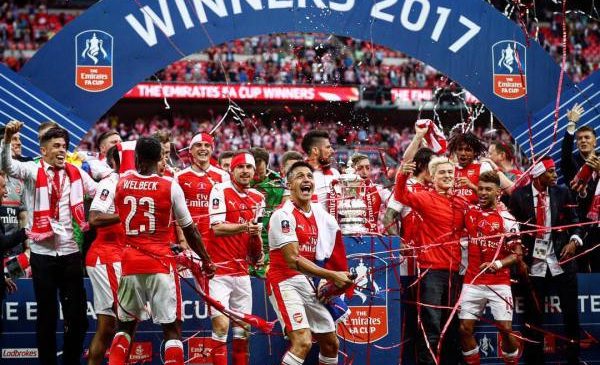 This is one news item Arsenal Football Club fans all over the world would not be happy about right now after winning their 13th FA Cup on Saturday…wait for it; Arsenal manager, Mr. Arsene Wenger has agreed a new two-year contract, extending his 21-year reign at the club.

Yes you heard right – Wenger and club owner, Mr. Stan Kroenke met on Monday (May 29, 2017) to determine the Frenchman’s future, with the decision relayed to directors the following day at a board meeting. Arsenal are planning to make an official announcement on Wednesday, which we expect, would set world of football punditry ablaze across the world. Most of the notable football analysts have been calling for Wenger’s head for steering Arsenal adrift both the English Premier League trophy and Champion’s League.

The Gunners were fifth in the Premier League this season, the first time they have finished outside the top four since the Wenger joined the club in 1996. Sadly, Arsenal finished 18 points behind champions Chelsea, but beat the Blues 2-1 at the weekend to win the FA Cup on Saturday at Wembley. Wenger’s contract was set to finish at the end of the current campaign. He evaded so many questions from reporters demanding to know his fate at the end of the just concluded campaign.

Since arriving Arsenal, Wenger led the Gunners to three Premier League titles and four FA Cups in his first nine seasons in charge. In 2003-04, he became the first manager since 1888-89 to lead a team through an entire top-flight season unbeaten. But after winning the 2005 FA Cup, they had to wait another nine years for their next silverware. It came as they beat Hull City to win the 2014 FA Cup, before winning the trophy again in 2015.

Some Gunners fans turned on the 67-year-old Frenchman as a result of their league performances and they lost 10-2 on aggregate to Bayern Munich in the Champions League last 16 in March. They finished the league season with five successive victories, but it was not enough to carry them above Liverpool to take the fourth and final Champions League spot. Wenger told BBC’s Football Focus on Saturday the criticism he has faced this season is “a disgrace he will never forget.”

Anti-Wenger banners were held aloft by Gunners fans in the closing stages of a 3-1 defeat at West Brom on 18 March 2017, while in the first half two planes towed banners over the ground – one criticising the manager and the other supporting him. After that loss, Wenger said he had made a decision on his future, which he would announce “very soon.” He faced significant criticism around that time, with former Blackburn and Celtic striker Chris Sutton telling BBC Radio 5 live on 20 March that Wenger was “an uncle who doesn’t want to leave the party” and was running a “dictatorship”. Chelsea manager Antonio Conte, meanwhile, described Wenger as “one of the best managers in history.”