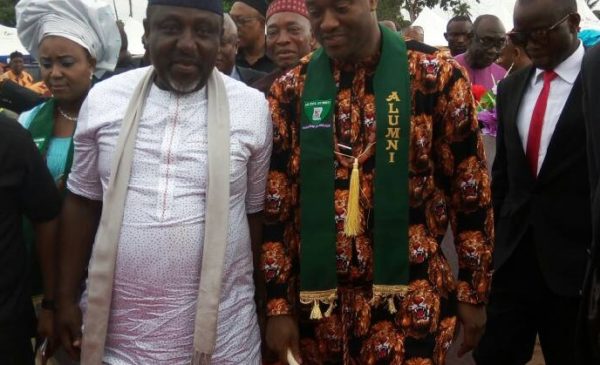 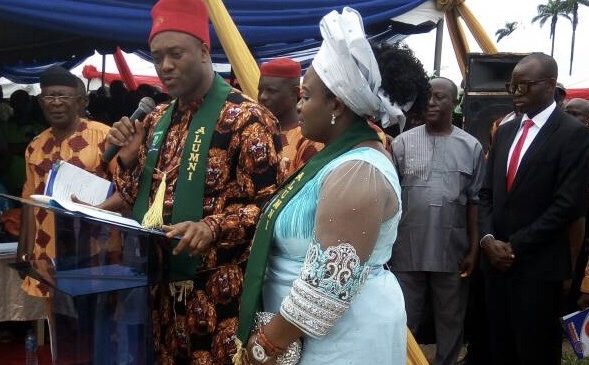 Imo State Governor, Owelle Rochas Okorocha at the weekend called on Imo State indigenes to heed his call when he points in the political direction come 2019 for who succeeds him as Imo State Governor as well as who continues to rule Nigeria as President. Okoroch argued that he hardly miscalculates when it comes to politics in Nigeria.

Okorocha who spoke at the grand reception in honour of Dr. Eberechukwu Uneze; an Executive Director with Asset Management Corporation of Nigeria (AMCON), said it was his smart calculation and vision that made it possible for Imo State to be one of the strategic APC stronghold states today. With that sort of foresight, Okoroch called on the people of Imo State to brace up to follow him come 2019 when again he would dictate the direction Imo should go in terms of who takes over from him as governor of Imo State and at the presidential level.

His words, “I came here in person today to honour our own brother, Dr. Eberechukwu Uneze who is serving today as an Executive Director of AMCON. His appointment by the government in power was only possible because I saw the vision that APC was the way to go and you, the good people of Obiokwu, Amakohia-Ubi, in Owerri-West Local Government Area of Imo State followed me.”

With 2019 fast approaching, Okorocha has again called on Imo State indigenes to trust his judgement when he points in the direction of who takes over as Imo State governor and at the presidential level. Luckily for the people of Obiokwu, Amakohia-Ubi, in Owerri-West Local Government Area, it does appear Okoroch may be looking to have somebody from the area as credible replacement at the Imo State Government House. Aside from Dr. Uneze, nobody from the area had had federal or state appointment in the last 41 years.

His words, “I am looking at your son, Dr. Ebere as someone that is promising politically. You know that we will look for distinguished and outstanding personalities to continue the good work we have started in Imo State. When 2019 comes, I would want you to trust me because I am looking in his (Dr. Uneze) direction because if the Federal Government trusts him with the tough job he and his colleagues are doing at AMCON, we want technocrats like him in Imo State government.”

With the honour done to Dr. Uneze, whom he described as a good brother and friend, Okoroch assured Obiokwu, Amakohia-Ubi people that their proximity to Owerri, the Capital of Imo State would henceforth attract government presence to the area.
Earlier in a presentation jointly signed by Barrister Sir. C. J. Ihemedu and Prof. A.A. Igwenma on behalf of Umunwoha Patrotic Front (UPF), thanked President Muhammadu Buhari for considering their son, Dr. Uneze for a federal appointment and called on Gov. Rochas to ensure that the area received the dividend of democracy before the end of his tenure. In his own part, Dr. Uneze told Governor Okorocha that he was overwhelmed that the governor would amid his tight schedule find time to grace the occasion in person.