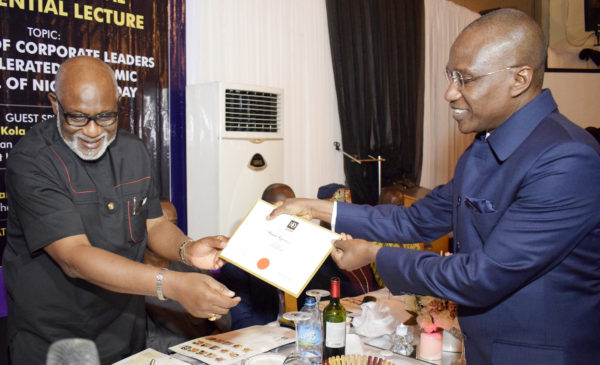 Managing Director/Chief Executive Officer, Asset Management Corporation of Nigeria (AMCON), Mr. Ahmed Kuru has been admitted as a Fellow, Institute of Directors (IoD) at the institute’s 2017 5th biennial presidential lecture in Lagos. The topic of this year’s lecture, which was delivered by the Chairman of Nigerians Breweries Plc, Chief Kola Jamodu CFR, is “The role of corporate leaders in accelerated economic revival of Nigeria today.”

Speaking at the event, which was also attended by the Ondo State Governor, Mr. Arakunrin Oluwarotimi Akeredolu, SAN, the President and Chairman of Council, Institute of Directors, Mr. Samuel Yemi Akeju said the IoD is very meticulous in the selection of top corporate players that are admitted as Fellows, which is the apex on the scale of the three categories of the membership for which Kuru eminently qualified for admission.

He said the institute has watched Kuru’s stewardship over the years in the different firms he has led and have seen track records of outstanding leadership criteria without blemish, which was why Kuru’s membership as a Fellow of IoD was unanimously approved by the council when it came up for discussion. Kuru, according to a citation is a career banker with professional experience spanning over three decades across investment banking, risk management, operations, human capital management and marketing amongst others.

Prior to his appointment as the Chief Executive of Asset Management Corporation of Nigeria (AMCON) by the Presidency on August of 2015, Kuru served as the Managing Director/CEO of erstwhile Enterprise Bank Limited. His ingenuity at turning the then beleaguered bank around and returning it to profitability earned him the famous name in the financial sector as the turn-around-agent.

Confronted with a herculean task at AMCON whose total debt obligation of N4.6 trillion represents 75 per cent of the 2016 national budget; 26 per cent of the 2016 total national debt, and 5 per cent of the country’s nominal gross domestic product in 2016; Kuru who is driven by result hit the ground running. Expectedly some far-reaching changes he introduced at the Corporation increased the tempo of recoveries and strategically refocused AMCON on value enhanced exit of its portfolios, which encompasses continued negotiations and resolution of loans through cash recoveries, asset forfeitures via negotiation or enforcement; capital restructuring for short to mid-term exits as well as joint venture arrangements for asset operations and land development.

His creative leadership methodology at the government agency has led to the repositioning of AMCON’s debt recovery approach as he has strengthened the legal and credit restructuring units to collaborate and perform more efficiently with asset tracing engagements to enable AMCON recover much more. As a result of this, AMCON was able to successfully divest 100 per cent of its equity holding in Keystone Bank Limited, the last of the bridge banks in the book of AMCON. The Corporation also saved Arik Airlines (the largest local carrier) and Aero Contractors (the oldest carrier) from shutting down operations. Irrespective of the economic challenges of last year when the country experienced recession, AMCON still recovered over N134billion in 2016 alone.

Under his leadership, the Corporation is exploring the creation of robust Real Estate Investment Trust Scheme (REITS) that would provide market driven exit for AMCON’s real estate assets as well as additional capital market instruments for institutional investors such as the Pension Fund Administrators (PFAs) and other interested parties. AMCON is engaging with financial advisers, private equity and mezzanine Funds as potential partners for joint venture and other capital restructuring arrangements.

The dedicated corporate player has served on the Board of over 30 organisations and is currently playing key roles in a number of them. He is an outstanding and experienced corporate executive with proven leadership attributes; a community builder, motivational speaker and a mentor. Kuru is also a Fellow of both the Chartered Institute of Credit Administration and the Chartered Institute of Bankers Nigeria (CIBN), just to mention a few.

It was this enviable track record that informed his admission as a Fellow of IoD and the institute chose no other person that the Governor of Ondo State to hand over the certificate to the AMCON boss at the high-profile event.