The Asset Management Corporation of Nigeria (AMCON) today (Thursday January 28, 2021) in Enugu State cleared the air on the raging controversy surrounding the enforcement action at Providence High School, Enugu State. Earlier reports following the enforcement action alleged that the Corporation detained not less than 344 students and their teachers thereby making the premises inaccessible to anybody.

Head, Corporate Communications Department of AMCON, Mr Jude Nwauzor who spoke with our correspondent in Enugu earlier today said “AMCON did not shut down the school nor detained the students and their teachers as speculated in the media. He said what happened last Friday when the court bailiffs enforced on Providence school was only statutory as directed by a court of competent jurisdiction.”

True to Nwauzor’s position, when our Correspondent visited the school after the chat on Thursday afternoon, it was observed that both vehicular and human traffic were ongoing at the school as people were seen going in and out of the school premises, which is contrary to media claims that the school, which is located on the ever-busy Independence Layout in Enugu was taken over and shut down by AMCON.

However, our correspondent observed some boldly written “Possession Taken By AMCON in Suit No. FHC/L/CS/662/2016 Today Friday Jan. 22, 2021,” and another medium size sign board with AMCON logo, which reads “Caveat Emptor Possession Taken By Order of Court.”

There were no padlocks at both the main and the pedestrian gates as were earlier reported. People were seen going in and out of the school premises. There was also no sign of stern looking policemen or AMCON security personnel at the entrance of the school. But all attempts to see the proprietor of the school, Chief Mrs. Elizabeth Onwuagha during the visit was unsuccessful.

Nwauzor, who insisted that earlier reports of the enforcement raised false alarm thereby misinforming the public stated that because of the strategic role of academic institutions to the development of human resource in the country, AMCON does not shut down schools that are heavy laden with debt because the Management of AMCON understands the strategic importance of that sector of the growth and development of capacity and the economy to the country.

He also said it was surprising how the media was not interested in the facts of the case but was purely looking at the matter with elements of sentimentalism. In his words, “It is sad that earlier reports looked at the story with a bit of sentimentalism and emotion, most of the reports were not based on the facts of the court case that led AMCON to the school. I thought that the media as an umpire ought to look at the story deeper and see the facts of the case as is, which gave birth to the court order AMCON rode on to enforce on the school. There are a thousand and one other schools in Enugu State, I think the question the media should be asking is “why Providence School? and not take sides. 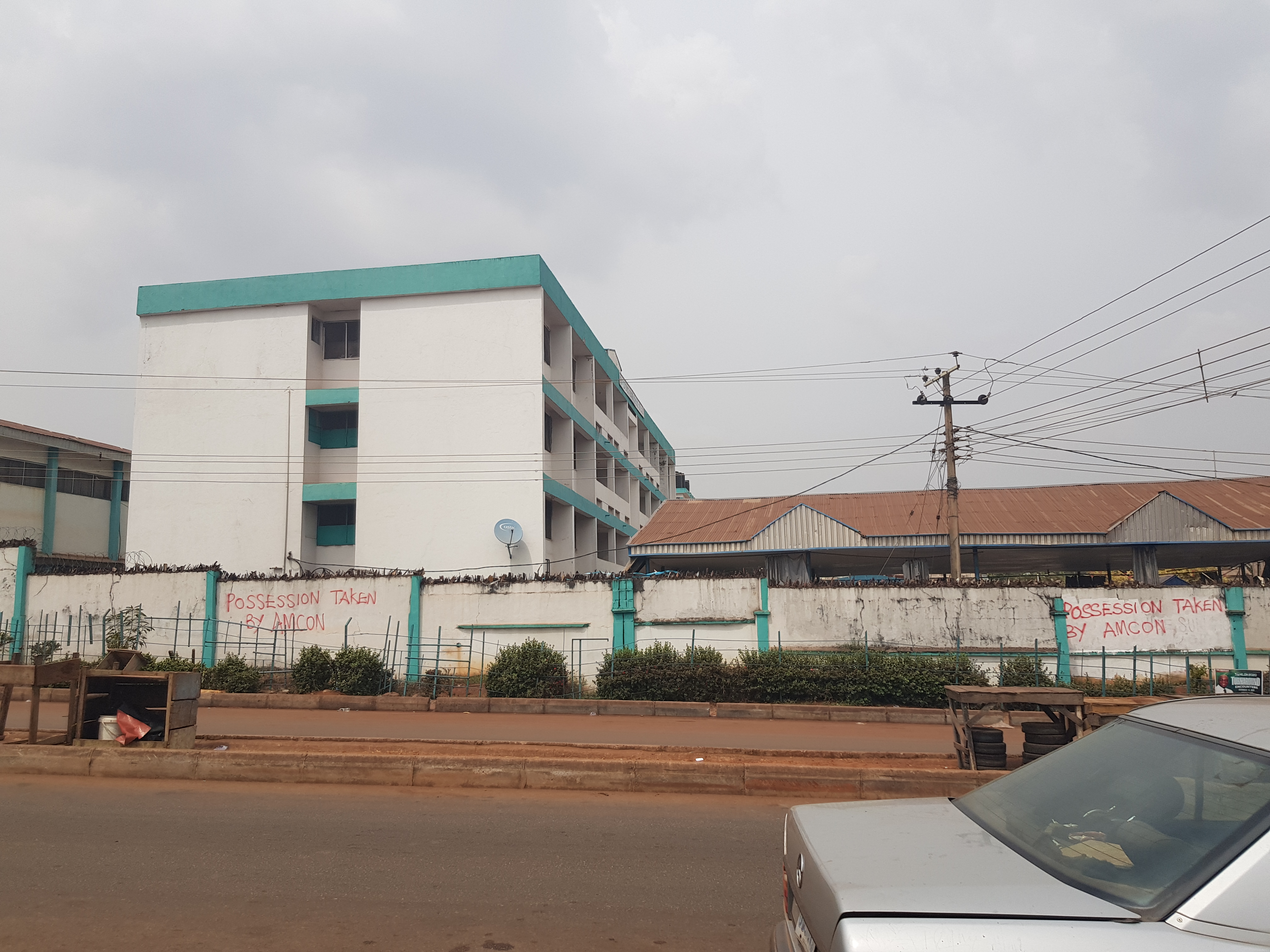 AMCON possessory inscriptions on the fence of the school

“The facts of the matter are straight forward – AMCON obtained express court order attaching the property to satisfy AMCON indebtedness and what AMCON did in the case of Providence High School, Enugu was in obedience to that court order. So, if any party feels that AMCON has done anything wrong, that party must approach the court, which gave the order in the first place to challenge it and not run to the newsrooms.

“Please do not misunderstand me when I say that because people have the right to vent. But from the little I know from previous and similar cases in AMCON portfolio, no amount of news reports, feature articles, news analysis or even the strongest of editorials will change the facts that are contained in the documents that are before the honourable court. Therefore, media trails and a thousand courts of public opinions will not help the matter better than engagement with AMCON by the school authority would.” 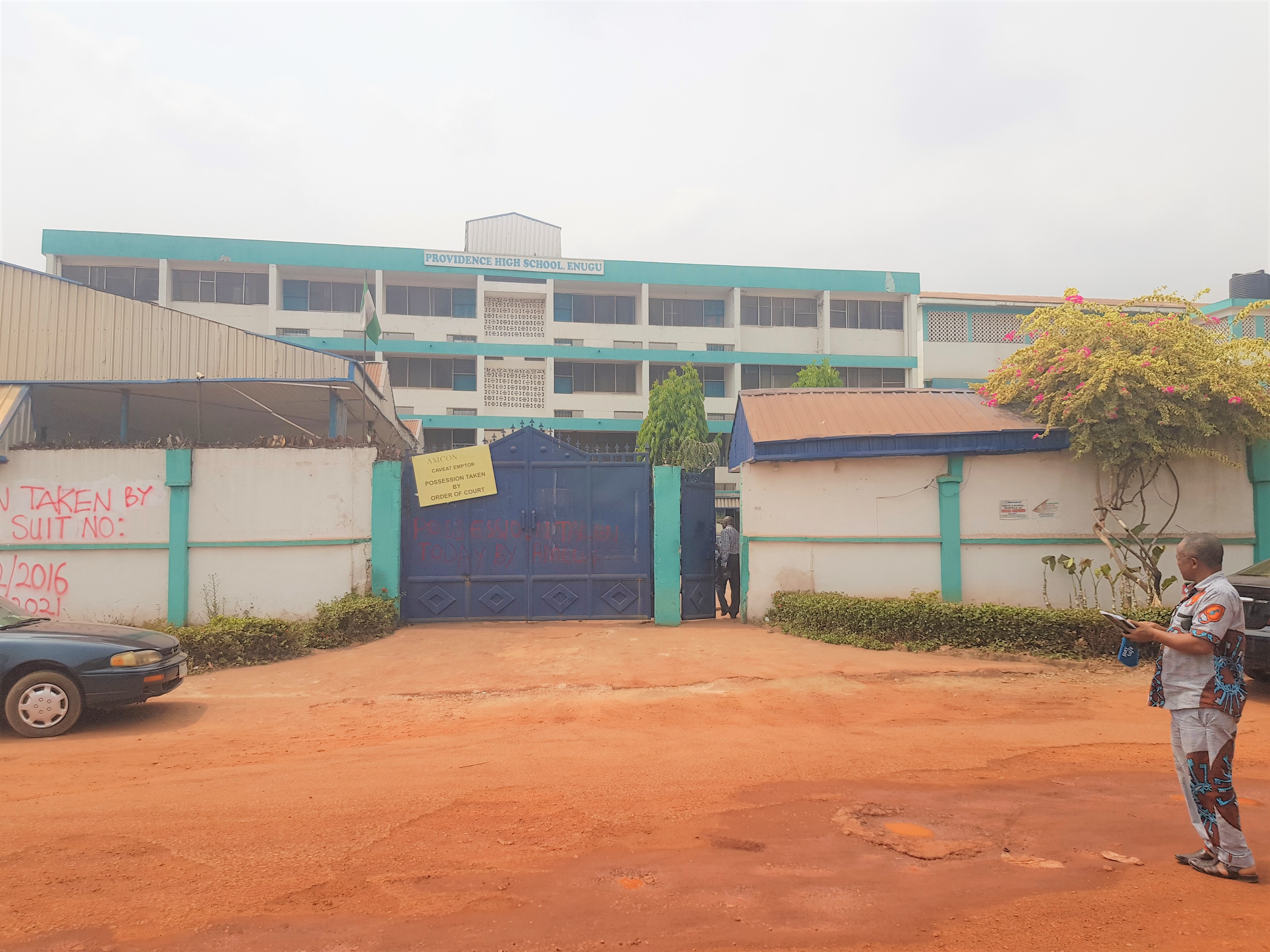 When asked if AMCON was aware that the property on which the embattled school is located was given to the proprietor as a gift and the person who gave her the gift was dead, Nwauzor responded, “This is not a case of pity and emotional attachment to the issues on ground. He fact of the matter is that AMCON was mandated by the court to enforce on the property and as a responsible government organization, we cannot disobey a court order.”

We gathered that as far as AMCON and records are concerned the property where the school is located belongs to Ferdinand Property Investment Limited. The company, we learnt many years ago took loan from UBA Plc, and also gave Corporate Guarantee in respect of the $2.9m AFDB loan granted to Ferdinand Oil Mills Limited in 1989, which has remained unliquidated resulting in AMCON acquiring the loan.