At the final whistle, as the Bayern Munich team, squad, staff, the bulk of the tiny travelling party allowed into the Estadio da Luz, danced in joyous celebration together, one man stood apart. David Alaba had consoling arms around the distraught, sobbing figure of Neymar. He wouldn’t let him go. He wouldn’t join his team-mates. Each time Neymar made a move as if to break away, Alaba pulled him closer. He appeared to be whispering in his ear. Private words, as if of condolence.

No-one had died, except Paris St Germain’s dreams and ambitions for another year. Bayern Munich have six of these now, the same as Liverpool. Only AC Milan and Real Madrid have more. Yet PSG’s search continues. Neymar was the player they bought to realise that ambition. And it was not enough. Only Alaba seems truly aware of the wait his opponent was carrying. Finally, a handful of Neymar’s team-mates came over. Worse, the man who denied the defeated Parisians on the night, had left PSG over exactly this policy: the stellar recruitment project.

Kingsley Coman had been at PSG’s academy since the age of eight. He was their protégé, their brightest star, the youngest player in the history of the club, making his debut at 16 years, eight months and four days. Yet as PSG grew bigger, as money was increasingly invested in talent from outside, the teenager grew fearful of his pathway. He ran down his contract and, in 2014, left for Juventus. Neymar wasn’t in Paris yet – but it was obvious the direction in which the Qatari-backed project was heading.

And so it was that, in Lisbon, the player PSG for all their wealth, could not keep returned to harm them, in the most painful way possible. It was Coman who denied his former club their first Champions League trophy, Coman who made Neymar cry, Coman who outshone both him and Kylian Mbappe – and even Robert Lewandowski – just by finding the net with the sweetest, simplest of headers. That was all it took; one properly converted chance.

As so often happens in finals, this was not, after all, the all-action, high-scoring thriller many had imagined. It was a decent game, but not the finest exhibit of the art of goalscoring, or attacking football. Lewandowski, top scorer in every tournament he participated in this season, missed a few; Mbappe was very tame; Neymar was a creative force but did nothing to define the match, or his status as the world’s most expensive footballer. 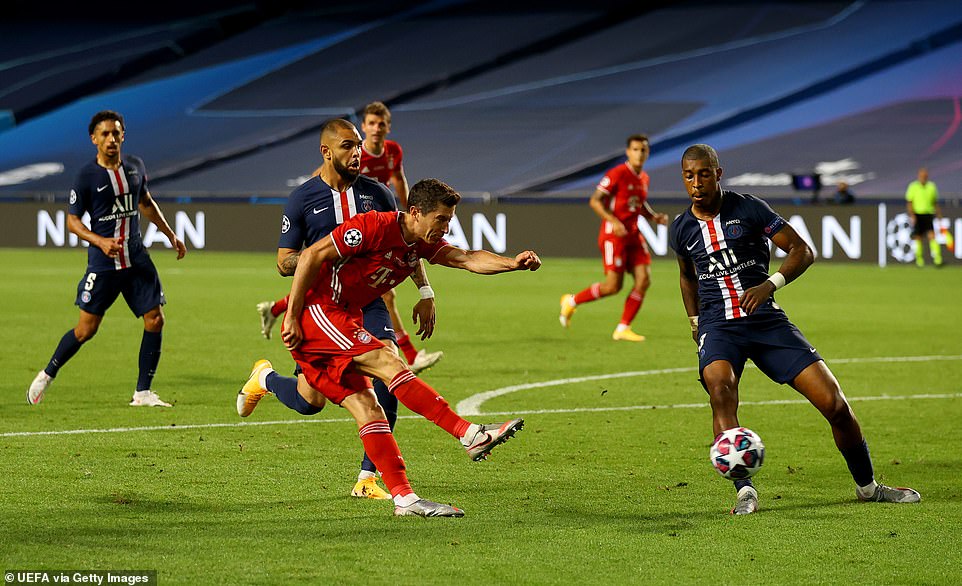 Coman, by contrast, had one chance, took it, and delivered Munich a clean sweep of titles for the 2019-20 season: Bundesliga, German Cup, Champions League, the second time it has happened after the clean sweep in 2012-13. Everything they entered, they won. It was a triumph, too, for coach Hansi Flick, who took an ailing team, turned them into a winning machine, and was vindicated in his decision-making to the very last fixture. Ivan Perisic has been excellent for Munich in this UEFA mini-tournament. For the final, Flick dropped him and picked Coman. It was a bold move but, given the return, it will be recalled as little short of inspired. This was his first start since June 27.

The goal that secured this, the strangest European final of all, came in the 59th minute. Good football in the build-up from Bayern, who had the best of the possession even if PSG should perhaps have done more with their chances. The cross from the right, though, from Joshua Kimmich was perfection, struck to the far post and falling perfectly for Coman who had crept in behind full-back Thilo Kehrer. It still needed converting, mind, and Coman’s soft little header was masterful. He steered it past PSG goalkeeper Keylor Navas, back the way it came and into the far corner.

Flick’s reputation with Germany was as a set-piece specialist and one wonders how much time his players spend on the training field, honing their technique. It certainly looked to have paid off. Coman is a lovely, skilful player, but any old-fashioned centre-forward would have been proud of that finish.

Credit also, to Bayern Munich’s back line, with so many predicting a rude awakening against PSG’s forwards. The French side have scored in their last 34 Champions League games, equalling a record set by Real Madrid between 2011 and 2014, but could find no way through here. Even once Munich had the lead, PSG did not look like scoring. Munich were fitter, stronger and dictated the pace of the game, steering it to conclusion. PSG, having spent so much money trying to win this trophy, grew increasingly rattled and irritable. Only in injury time when Neymar shot across the face of goal was there a moment when Munich came under threat of an equaliser.

They have long been acclaimed as the best in Europe this season but this win was accomplished more than overwhelming. As for the deluge of goals, how often do we see that in a game of this magnitude? Teams do not get here by being weak or soft. Eight past Barcelona, three past Lyon and then a gutsy single goal win to clinch the final. That’s how the best team in Europe does it. This was as much about containing PSG and Munich succeeded.

Angel Di Maria was largely quiet; Mbappe was deeply disappointing in front of goal; Neymar was the best of it, and enjoyed a pair of wonderful breaks through the heart of Bayern Munich’s midfield, but nothing came of them, save an aggravation of the muscle injury that had threatened Jerome Boateng’s participation in the game. The biggest stages can intimidate even the greatest players and while this famous arena was largely empty of sound and fury, there was little doubt what was at stake with the prize so conspicuously positioned.

And it wasn’t entirely without noise, either. Both clubs were allowed 25 additional guests for the final, as well as squad players, backroom staff, owners and directors, and Munich’s were in good voice. No match for the cacophony of the Allianz Arena, obviously, but not a bad attempt for a bunch of suits. They even had a crack at singing.

Not that there was much to sing about early on. Bayern had decent possession but little little cutting edge, and PSG made the brighter start. In the 14th minute, Julian Bernat had a cross cut back from the left which fell to Mbappe, the first of several opportunities that were crowned with an ordinary finish. This one was simply blocked. Then, four minutes later, Neymar came down the same flank forcing a double save from Manuel Neuer.

Neymar was involved again after 23 minutes, sprinting through the middle, defenders and sentries in his wake, not least Boateng who was a pre-match doubt with a muscle injury. Neymar released the ball to Di Maria, who played a lovely one-two with Ander Herrera, before firing a shot that flew narrowly over the bar. Boateng fell to the floor, and played no further part in the game, replaced by Niklas Sule.

It was a difficult spell for Bayern at the back. Soon after Alphonso Davies was booked for a foul on Thilo Kehrer, putting him in jeopardy for the remaining hour, at least. It is testament to their resilience that this did not disturb further. Later, Serge Gnabry would be booked for a nasty little challenge on Neymar, proving he may have learned something from Tony Pulis after all.

Another decent chance went awry in the minute before half-time when shoddiness in the Munich defence set up Herrera, feeding the ball to Mbappe. He should have shot but gave it back to Herrera, who returned the favour, Mbappe then hitting a very tame one straight at Neuer. Poor.

Lewandowski hit a post with a scuffed shot and forced a good save from Navas with a 31st minute header, but this was not a night for the strikers. As Neymar sat in tears in the stand, initially resisting the invitation to collect his runners-up medal – he ultimately relented – the message could not have been stronger. Here was a victory for the collective, for hard work and mental strength. Munich dug in. The team’s the thing.