Hoodlums today in Abuja attacked peaceful #EndSARS protesters in Abuja, injuring many of them and disrupting their peaceful rally. The hoodlums, had stormed the venue around 1:00p.m. on Wednesday, reportedly fired gunshots in the air before chasing away the #EndSARS campaigners. 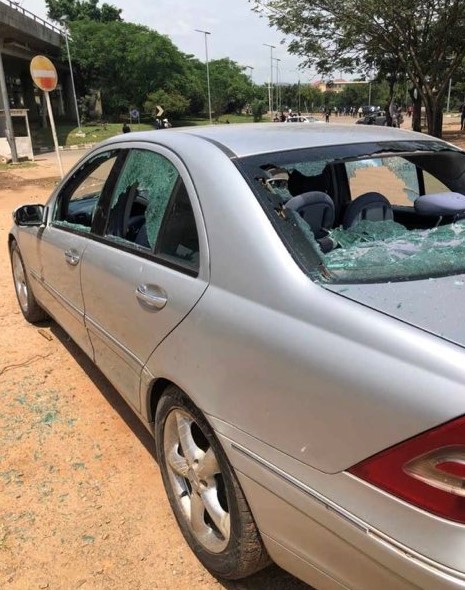 The protesters had blocked the Julius Berger roundabout in Wuse, with disused tyres and stones, and also prevented motorists from plying the route as they occupied the bridge. They were singing solidarity songs when their attackers suddenly appeared and assaulted them.

The attackers, who were speaking Hausa language, also vandalised about five cars parked in the vicinity. However, no life was lost as the police took control of the situation while the injured were taken to the hospital.

This is happening 24 hours after soldiers assaulted the protesters and harrassed an Arise TV cameraman at the Three Arms Zone. When contacted, the Federal Capital Territory police spokesperson, ASP Mariam Yusuf, promised to find out and report back.

Meanwhile, despite nationwide agitation against the Special Anti-Robbery Squad, supporters of SARS under the aegis of Coalition of Civil Society Organisations on Tuesday took to the streets to support efforts of the police in ridding the country of crimes. The organisation warned that the continuous protests against the SARS operatives were aimed at bringing down the government.